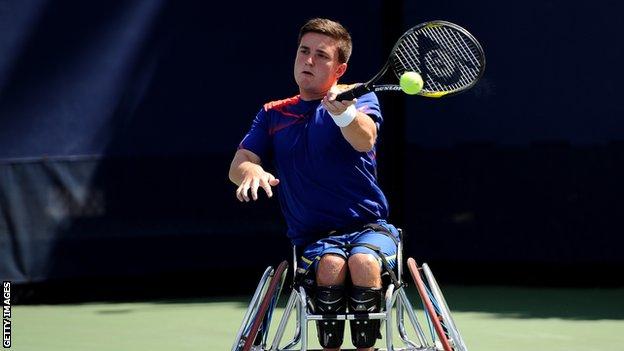 Whiley and Yui Kamiji of Japan were 6-4 6-1 winners over Germany's Sabine Ellerbrock and Kgothatso Montjane of South Africa in the women's doubles.

Whiley, 21, is the first British woman to win a Doubles Masters title.

That gave the top seeds their fourth successive tournament title.

Reid, 22, was disappointed to finish sixth in the singles competition, but added: "I'm just really happy to finish with the doubles title and to extend my unbeaten partnership with Stephane.

"It's great to get the title and I'm looking forward to the 2014 season already - and winning some more singles and doubles titles."

Whiley described her first Doubles Masters title as "an early Christmas present", adding: "This year's been amazing for me.

"We're now going to play the Australian Open together and hopefully Roland Garros before going back to Wimbledon, so I hope next year will be another big one for us."

In the women's doubles third-place play-off, Britain's Lucy Shuker and partner Marjolein Buis of the Netherlands were beaten 6-4 6-2 by Dutch pair Jiske Griffioen and Sharon Walraven.