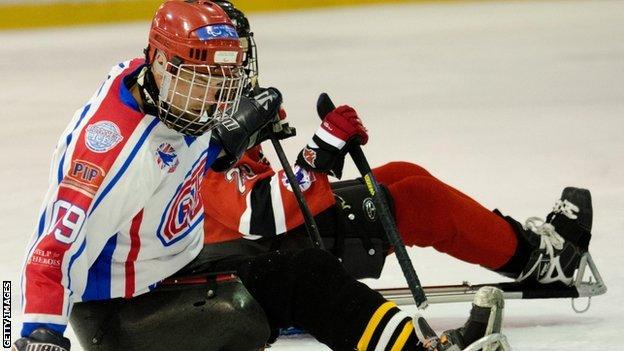 Paralympians Nathan Stephens and Stephen Thomas will both be part of the GB sledge hockey team for next month's Winter Paralympic qualifiers in Turin.

Both played in the last GB team to reach the Paralympics in 2006 in Italy before concentrating on other sports.

The team need to finish at least third in the competition from 20-26 October to reach Sochi next year.

They will face the hosts Italy as well as Sweden, South Korea, Germany and Japan.

GB lost to Germany and Japan at the B tournament earlier this year, where they won bronze, while the other three teams all missed out from the A Championship.

Three-time summer Paralympian Thomas was part of the GB at the B tournament but has just finished competing for the GB Sonar sailing team at the World Championships in Ireland, where he and crew-mates John Robertson and Hannah Stodel finished fifth.

Javelin thrower Stephens, who competed in Beijing and London, was part of the GB team at the IPC World Athletics Championships in Lyon in July but makes a welcome return to the sledge hockey ranks while there are five other survivors from the 2006 squad.

"This is the strongest team we've put together since my appointment," said head coach Andrew Linton. "It couldn't come at a more important time. All the players in the GB programme have worked extremely hard and we are sure that their dedication on and off ice will reap its rewards in Turin."