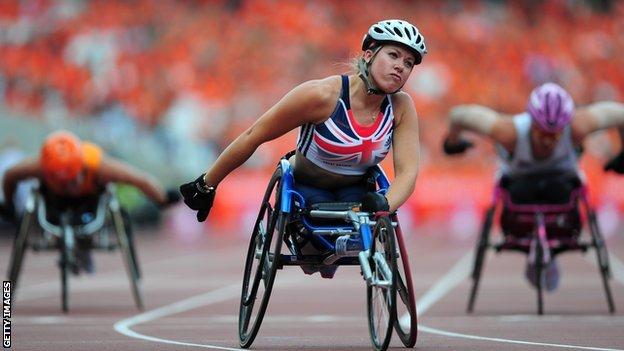 Double Paralympic champion Hannah Cockroft believes she can win two gold medals in Rio in 2016 - despite a change to her events for the Games.

However, the 200m will be replaced by the 800m in her category in Rio.

"It is hard to win a sprint and a middle-distance race, but nothing is impossible and it will look even more impressive if I can do it," she said.

"It is a new challenge and a new title and will help motivate me."

Cockroft is the world record holder in the 100m, 200m, 400m and 800m, the last of which has been included on the Rio programme by the International Paralympic Committee despite not being a regular event at track meetings until now.

She showed her dominance of the sprints with a double at the IPC World Athletics Championships in July, winning the 100m by over a second and the 200m by almost two seconds.

But despite her records, Cockroft, who starts a degree in Media and Journalism at Coventry University later this month, believes she will have to work hard to make an impact in the 800m.

"Not many of the other girls in my category do the 800m but once they start training for it and racing it, I think they will be a lot closer to my times than they are in the 100m and 200m," she told BBC Sport.

"But that is my motivation to keep training and it will make people understand that I have to train just as hard for any distance. It will be completely different training for both events but I think my coach Jenni Banks has a plan on how to do that.

"I have the strength and endurance for both races - it's when it comes to tactics for the 800m, like where to sit in the pack and when to make a break, that I still have a lot to learn.

"I will be more central in Coventry than I am in Yorkshire. Jenni is based in Loughborough so that is about a 50-minute drive away and I will be able to train with her more often. There is also a wheelchair racing training group at Warwick University I can train with."

Cockroft is encouraged by the number of young athletes coming into the sport since the London Paralympics, some of whom will be hoping to impress at this week's School Games in Sheffield, run by the Youth Sport Trust.

"Something like the School Games is very important for giving young athletes something to aim for and the chance to compete at a multi-sport competition," she added. "I competed at it three times and it did help me coming to the London Paralympics.

"There are a lot more young wheelchair racers on the scene now. In the T34 category there are a lot of males coming through but not too many females - I know of one 12-year-old who is doing really well and is fast for her age, but you have to keep young athletes interested in sport."