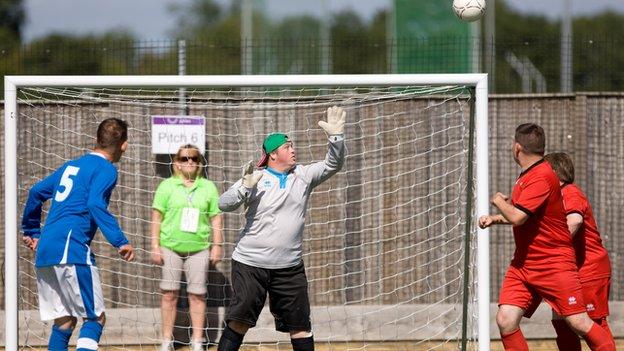 Described by organisers as the Games with the biggest smile, the Special Olympics GB National Games in Bath saw 1,700 athletes with intellectual disabilities from across the UK come together to take part in a dozen sporting disciplines.

The lavish opening ceremony last Wednesday, in front of the Royal Crescent, set the standard for the three days of action which followed.

Every athlete had to raise money to compete in the event but each left richer for the experience of having taken part.

As a charity, Special Olympics GB supports 8,000 of the UK's estimated 1.2 million people with intellectual disabilities. From its roots in this country 35 years ago, it now runs 150 clubs nationwide to help those with an IQ of 75 or under take part in sport.

Every four years, those selected get to test themselves against competitors from every region of Great Britain.

As well as the joy of taking part, getting involved may save their life.

As a result, every athlete competing in Bath was given a full health screening to check for any problems that may have been missed.

Each medal won at these Games was celebrated like any Olympic or Paralympic success. However parents talk of other benefits, including meeting hundreds of other parents and athletes who understand their feelings of isolation and discrimination, and who also see potential not limits.

Lorraine Gresty from Southport was in Bath to watch her 23-year-old son Daniel play in goal for the North West five-a-side football team.

"It's given him a lot more confidence and more awareness of other disabilities," she said. "Daniel doesn't do anything but sport. He won't watch telly, he doesn't read, so without sport he wouldn't have anything to do."

Daniel also plays table tennis for a club in Formby with players of normal intellect, but finding a club to take him wasn't simple. "It took us months," added Lorraine. "There seems to be some stigma attached as soon as you mention a disability and a lot of clubs don't want to know."

These were the ninth Great Britain games, but the first Special Olympics to be held on a university campus. Nine of the 12 sports took part here, with golf being played at a nearby course. Ten-pin bowling needed an alley in Bristol, with swimming moved there too to accommodate the hundreds of supporters that attended each session.

Having so many athletes and families together on the same site has proved to be a formula for success, and Special Olympics GB is talking to Bath and other cities about repeating in 2017 but before then, many of the winners from Bath will be hoping to be selected to represent Great Britain at the World Special Olympics which take part in Los Angeles in 2015.

For many, taking part in the Special Olympics is in its own way an achievement, but others want to see this level of disability sport mirror its Olympic and Paralympic cousins and be more competitive.

"Things are certainly moving in the right direction but I sometimes wish they would take the sport more seriously," he told BBC Sport. "Its not just about taking part.

"You tell the public or our athletes it's just about taking part and they will think you're crazy. They are here to win and compete and I just wish there was more of that in the Special Olympic movement."

Tennis player Thomas Mellor, 24, from Cheltenham won gold in the doubles and a silver in the singles. He also got to light the Special Olympics cauldron at the opening ceremony but he says he feels unable to take his sport to the next level.

"We need funding and sponsorship in the way wheelchair tennis does," he said. "I don't really see why we can't have some to see how far we can go, even in mainstream tennis."

However, Special Olympics GB chief executive Karen Wallin remains positive about the future of sport for people with intellectual disabilities.

"There's a long way to go, but I think people are understanding that some Special Olympic athletes may have the ability to go up to a Paralympic level, and they should be given every support to do that," she said.