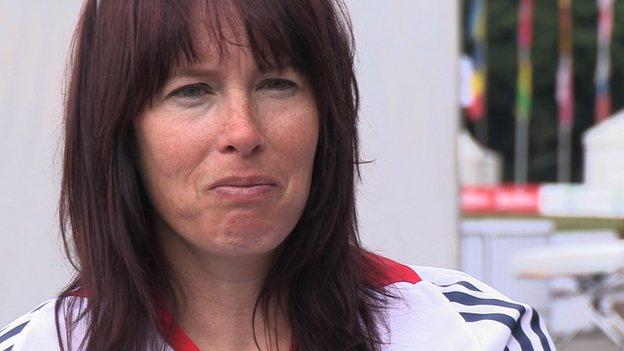 Jeanette Chippington won three golds in the space of an hour on Wednesday, with team-mate Emma Wiggs also victorious.

Chippington, 43, has competed at five Paralympic Games as a swimmer but made the switch to canoeing in 2011.

Paracanoe will make its Paralympic debut at Rio 2016 with GB paracanoeists already regarded as world leaders.

In Wednesday's racing, Chippington successfully defended two world titles she picked up in 2012 and added a third, comfortably winning the K1 A class as well as the V1 A and TA classes.

"I feel pretty done in now," the 12-time Paralympic swimming medallist told BBC Sport after her golden hour on the Duisburg course.

"It's a fantastic achievement and I couldn't do it without the support and help of my coach, husband, children and family.

"It's a team effort but when you're out there at the start it's very, very lonely. The medals at the end of it make it all worthwhile."

Wiggs held off the challenge of the United States' Megan Blunk to win the K1 TA class.

"I didn't know when I crossed the line whether I'd got it or not," said the 33-year-old from Hertfordshire.

"It felt like a really good race and the bonus of crossing the line first is just incredible. I can't quite believe it."

Wiggs, like Maidenhead-based Chippington, recently transferred into canoeing from another disability sport. She had previously captained the British sitting volleyball team at London 2012.

"A year ago today, I was getting ready for the opening ceremony," she said.

"That was an incredible experience but this was out of this world."

British paddlers look set to dominate at Rio 2016 if they maintain their current form, and Chippington said Paralympic ambition was on her mind.

"You don't want to wish your life away but you think 'if only it was next year'," she said. "I'll keep working hard at it and chipping away at my times."

Heald finished behind Spain's Javier Reja in the V1 TA class, while Hopwood was upgraded to V1 A bronze after the disqualification of Brazil's Luis Cardoso da Silva for leaving his lane.

On Friday, Gauthier could not match Green in the women's V1 200m LTA final, which the Briton won by almost two seconds.