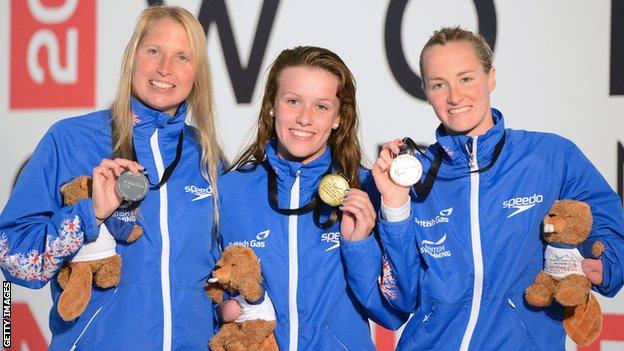 The IPC Swimming World Championships proved to be a successful one for the British team, with new records set, medals won and the rise of some new talents in the sport.

As they have done at so many international competitions, the British team enjoyed a successful time, winning 55 medals, including 18 golds, for third place on the medal table - two places higher than London.

So what did we learn from the seven days of competition?

This was the first major event for the new Paralympic performance director Chris Furber, who has moved to the sport from cycling, and it was a successful transition for him.

In Montreal, he was leading from the front poolside and was involved at all times, including when Amy Marren was disqualified from her 200m IM heat before being reinstated, and it is good to see - otherwise you can be left wondering who is in charge of the team.

He is working with young athletes for the first time and I think he really relishes that and is keen to get to know them and nurture them.

Everyone I spoke to on the GB squad has enjoyed working with him so far and mentions the great atmosphere, and it bodes well for the next three years as we build up to Rio 2016.

Rio remains on the horizon

A lot of swimmers suggested they were lacking motivation after London 2012 but they came here and performed and, although the numbers of athletes per team may have been smaller than London, that is the same after every Games.

It was a shame in some ways that there weren't bigger teams from the likes of Australia and China. But it gave a lot of other swimmers the chance to show what they can do and they went out and set personal bests and set new area and world records.

Organisers have said they are hoping to get even bigger crowds in Rio than in London as they try to push the movement on even further.

In the build-up to the Games, they are paying media teams to attend major international events and report on the achievements of the Brazilian athletes.

The youngsters on the team are really inspiring each other and it is great to see, but they also need to have a good support network behind them.

In Montreal we had London gold medallists Josef Craig and Jessica Jane Applegate, both 16, repeat their victories, but the emergence of Amy Marren, who turned 15 out in Canada, was a massive story for the GB team.

As well as her racing, I was really impressed with her mental attitude in how she dealt with her disqualification and subsequent reinstatement in the medley and I think that moment of panic helped strengthen her.

After it happened, she rang her parents and apologised for letting them down but her mum told her not to worry and that the most important thing was being at the championships and competing, which was a great thing for Amy to hear.

But the veterans are still showing they have what it takes

Swimming is considered a young man's sport, but on the GB team you have people like Sascha Kindred and Matt Walker who both won gold in Montreal at the age of 35.

Both have such amazing talent and will always pass on their words of wisdom wherever they can.

The team needs those sort of athletes around because without them it would be a very young team and it might be lacking an element of maturity and experience and a wise head who has been through it themselves.

Matt is more open about the possibility of competing in Rio. He has moved training groups in Manchester and this gold will give him confidence.

As a father, Sascha has extra responsibilities to juggle and he has yet to say what he will do, but I don't believe he is going to retire just yet.

Ellie still shines in the pool

Ellie Simmonds came into the World Championships admitting that she struggled with a lack of motivation after the London Paralympics.

But in her last event with coach Billy Pye before she moves to a new base in Loughborough, she took a bit of a risk and did six events, coming away with three golds and a bronze.

However, because of the nature of her disability (dwarfism), she struggles in the sprint events and was in tears after the 50m freestyle when she came fourth before being promoted to bronze - it shows she still sets her targets high.

Nobody can doubt her professionalism as an athlete for enjoying her year post-Games and still being able to come to this event and back it up with medals. In addition, she produced personal bests in both the breaststroke and the backstroke.

She is leaving Billy on a high and it couldn't have been a better thank you to him for what he has done for her.

The situation where American Victoria Arlen, one of Ellie Simmonds's main rivals, was ruled ineligible for Paralympic swimming just days before the start of the World Championship did cast a bit of a shadow over the event.

Incidents like that will always damage the sport and, as a former athlete, it frustrates me greatly and you always hope these sort of things don't come up at a major championship, especially to an 18-year-old who doesn't deserve that sort of treatment.

The IPC says that having observed Victoria in her home environment, there is hope that she might be able-bodied one day. Its way of justifying the decision to declassify her is that you can be involved in Paralympic sport if your condition is degenerating, but not improving.

It is a difficult situation but while both fellow BBC commentator Karen Pickering and I discussed it and agreed that the classification needs to be changed, we couldn't come up with a better way to do it. However, it is a subject that certainly needs to be talked about more within the Paralympic movement going forward.