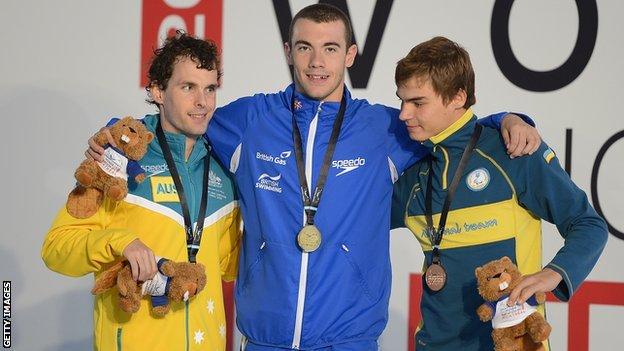 Britain's Josef Craig landed his second gold medal at the IPC Swimming World Championships in Montreal, with victory in the S7 100m freestyle.

The 16-year-old won the 400m freestyle and finished second in the 50m freestyle earlier in the programme.

And he held off Australia's Matthew Levy in the 100m, winning by 0.15 seconds.

"I'm not really a sprinter, I'm more of a long-distance racer but I've been working hard on it," he said.

"It usually takes a while for me to get into the race and Matthew was off like a bullet in that second 50m.

"I've been practising my finish vigorously and it must have seen me through."

"There was an Ashes battle in the pool in Montreal with England's Josef Craig versus Matthew Levy of Australia - and it was another win for England. Craig was genuinely surprised to win the 100m free title as his focus has been on the 400m"

Slater, who is in her first major international competition after being classified as a disability swimmer last year, had another fantastic battle with American Jessica Long.

The 22-year-old from Preston was a talented able-bodied swimmer before suffering a muscle problem which has left her without the use of her left arm. She improved her own European record of one minute 11.03 seconds to 1:10.12 as winner Long set a new world record of 1:09.79.

"London really inspired me to get back into the pool," Slater told BBC Sport. "I was a Games Maker and watching everyone competing gave me the fighting spirit to come back.

"To go under the old world record is amazing and I will get back into the pool and train even harder next season. My main focus is Rio in 2016 and I will be aiming for gold. Jess knows she has competition and that is good for both of us."

Rodgers again found American Cortney Jordan too strong in the 100m free, clocking 1:13.03 to add to her 50m and 400m silvers, finishing just 0.91 seconds behind the American.

Lough, who had qualified second fastest from the heats, impressed to claim bronze in her first World Championship final while Clegg, the brother of athletics star Libby, took three seconds off his British record in 4:21.76

There were also British records for James Hollis (S10 100m butterfly) and Scott Quin (SB14 100m breaststroke) as both finished fifth in their respective finals.