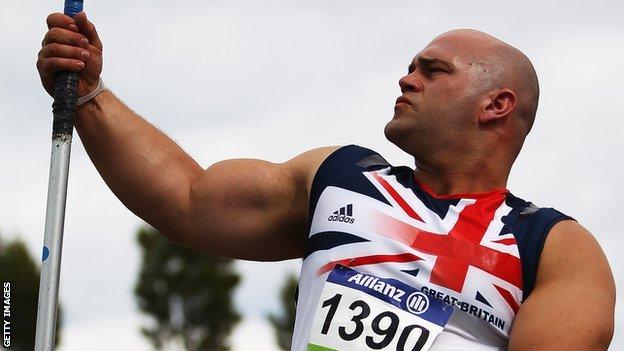 Danny Nobbs will abandon shot put for javelin in an attempt to qualify for the Rio Paralympics.

The F54 shot put will be dropped for 2016, provoking a switch in discipline for the Attleborough athlete.

"I will be competing against guys with a similar disability on a level playing field," he told BBC Radio Norfolk.

"Hopefully I'll be in with a good chance when I can master the technicalities and be up there with the big boys."

Nobbs, 10th at Beijing in 2008, failed to qualify for last year's Paralympics after a change in the regulations for throwing frames hindered his distances.

Since then the International Paralympic Committee has dropped the F54 and F56 shot put in favour of just an F55 event.

"If I stuck with the F55 I would be competing against guys with full abdominal and back muscles, which I haven't got," added Nobbs.

"We made the decision that in the four-year period to Rio the javelin was the event I could hopefully make the biggest gains in and hopefully get selected for Team GB.

"It's frustrating and unsettling because you dedicate your life to the sport.

"The Paralympic Games is the flagship event of paralympic sport and all of a sudden that can be be taken away from you."