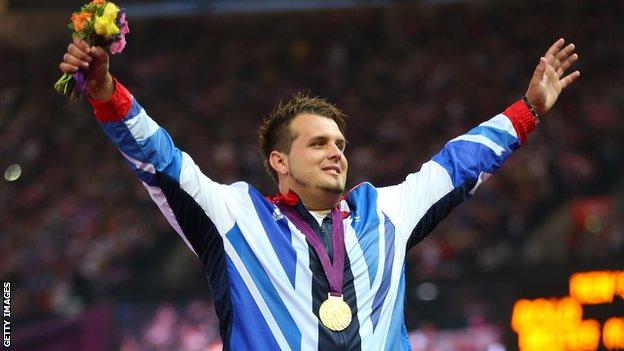 Paralympic champion Aled Davies will not get the chance to defend his discus title at the 2016 Rio Games.

The F42 category of the event is being removed from the games though the F42 shot put, in which Davies won bronze at London 2012, stays.

They've taken out events which are so strong and competitive

Davies is now hoping to gather support to try and get the International Paralympic Committee (IPC) to reverse its decision.

"I'm very upset but also angry and frustrated at this time," Davies said.

IPC Athletics has announced the medal events for the 2016 Paralympic Games and Davies said he was baffled to discover the event in which he won gold last year was not included.

"I'm just gutted to be honest because at the moment I haven't got a discus event in Rio which I've grown up doing and what I'm funded to do," he said.

"All I can do now is fight my corner and hopefully I can get a lot of people behind me to support me and make the IPC realise they are throwing away a good event.

"The only way I can do that is if the public come out and help support me and hopefully help turn over their decision.

"They've taken out events which are so strong and competitive, not just in Britain, but around the world as well.

What is the F42 category?

"People are striving to push the world record up to able bodied standard."

The 22-year-old also set a new stadium record in winning the shot at last weekend's Anniversary Games in London.

He will be competing at the Welsh Athletics International fixture on Wednesday but Davies said the evening at Cardiff's Leckwith Stadium will be one of "mixed emotions."

"It was going to be my last competition of the season and then I can think about going into winter training and coming out next year and being even better.

"At the moment I'm kind of not looking forward to competing now because it could be the last time that I compete in the discus."