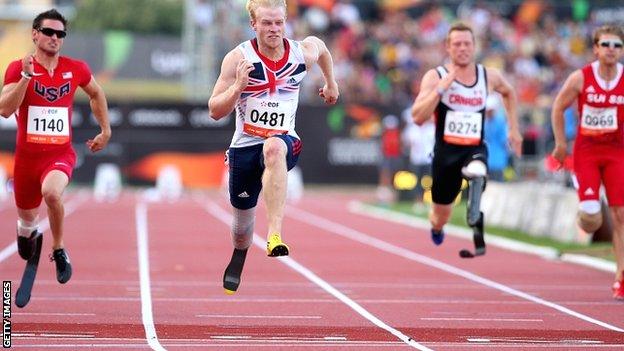 Newly crowned world T44 100m champion Jonnie Peacock has a record on his mind ahead of Sunday's London Anniversary Games at the Olympic Stadium.

Peacock faces Richard Browne, the man who finished second to him at the IPC World Championships on Tuesday but took his world record in the semi-finals.

But in the T43/44 100m race the pair will also face double amputee star Alan Oliveira, who won three golds in Lyon.

"If conditions allow, hopefully I can regain the world record," said Peacock.

"In the final, if we had the same wind as we did in the semi-finals I would have gone close to beating Browne's mark," he told BBC Sport.

"I'd like to say the time is there - it's just a matter of getting the right conditions and executing the perfect race."

My most memorable moment of London 2012 was coming out for my first event and hearing the volume of noise from the crowd so I'm hoping to experience that again on Sunday.

The Brazilian is also looking forward to the challenge of facing his single amputee rivals.

"It is going to be a big party. I'm really excited about having the chance to compete again in London and of course we have great athletes competing," he said.

Aled Davies, who won double gold in the discus and shot at the World Championships goes in the F42 shot on Sunday, hoping to better the bronze he won in the event in London last year.

Davies threw a new world record of 14.71m to win gold in Lyon and has set his sights on improving that mark in front of a home crowd at the Olympic Stadium.

"I want to keep pushing the boundaries and hopefully go on to break that 15m barrier and give the crowd something to cheer. I know I am in good enough form to do it it," he said.

"My most memorable moment of London 2012 was coming out for my first event and hearing the volume of noise from the crowd so I'm hoping to experience that again on Sunday."

Double world and Paralympic champion Hannah Cockroft and Richard Whitehead, who also claimed victory in Lyon, will hope to continue their dominance in their events.

Also in action will be Paul Blake, who will face Northern Ireland's Michael McKillop in a T36/37 800m, while Dan Greaves takes on world and Paralympic champion Jeremy Campbell in the T44 discus.

And four-time London gold medallist David Weir, who opted to miss Lyon, is set to receive a great reaction from the crowd when he returns to the track for a special invitational mile event.