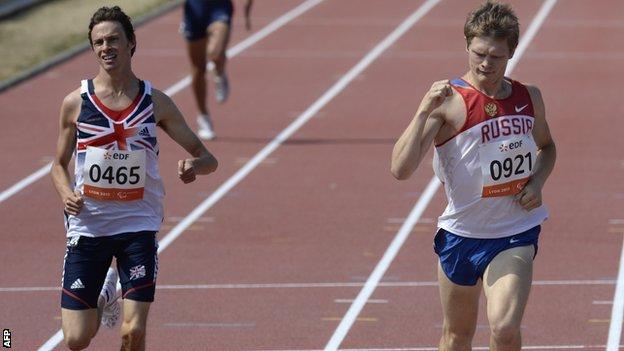 Mickey Bushell, Paul Blake and Bev Jones all added to Britain's medal tally on the seventh day of action at the IPC World Championships in Lyon.

Paralympic champion Bushell, whose shoulder injury forced him to pull out of the 200m and 400m events, took silver in the T53 100m.

And Jones won bronze in the T37 discus to take the GB total to 27 medals.

Meanwhile, Brazilian star Alan Oliveira won his third gold of the week with victory in the T44 400m in a new championship record of 48.58 ahead of American pair Blake Leeper (49.30) and David Prince (50.63)

Oliveira set off at a fast pace and by halfway looked like he could challenge Oscar Pistorius's world record of 45.39 but he tied up in the second half of the race.

"I'm really happy to go back with three gold medals. It's all about hard work and I have great support," said the Brazilian, who will race Britain's Jonnie Peacock and American Richard Browne over 100m at the Anniversary Games on Sunday.

The three medals won on Friday have helped the British team past their 25-medal target with two days' competition still remaining.

Bushell clocked 15.12 seconds in his race but was beaten into second place by Canada's Brent Lakatos, who also took gold in the 200m and 400m, in a new championship record of 14.51.

But 23-year-old Bushell said he was reasonably satisfied to win a medal after his disrupted preparations.

"I came here to see what I could do. I'm not in form but I've come away with a medal," he told BBC Sport.

"The injury has been getting gradually worse and every push I did I had shooting pain in my shoulder. I wasn't able to warm up properly so I had to warm up with the physio.

"I will take a break now and sort the shoulder out and get ready for next year. Laura [Penhaul], the physio I have been working with since May, has been amazing and I don't think I would have this medal without her.

"When I am back to full fitness, Brent will have a fight on his hands."

Bushell's injury means he will miss Sunday's Anniversary Games at the Olympic Stadium but one man who will be there is Blake, who found Russian 100m and 200m champion Evgenii Shvetcov too strong as he won in 56.27 seconds, 0.45 ahead of Blake.

"To add to the medal in the 800m is a great achievement for me but I'm disappointed not to have come away with gold," admitted the Briton.

"Coming out here I would have taken the gold and silver. I'm happy with the way I ran in both races. My training was good coming into the competition so it was just a matter of trying to replicate that in the races and I did that."

Jones, who won Paralympic bronze in the discus last year had a best throw of 28.54m to add world bronze to her honours with gold going to China's Na Mi in a new championship record of 33.09m and silver to Viktorya Yasevych of Ukraine (29.37m).