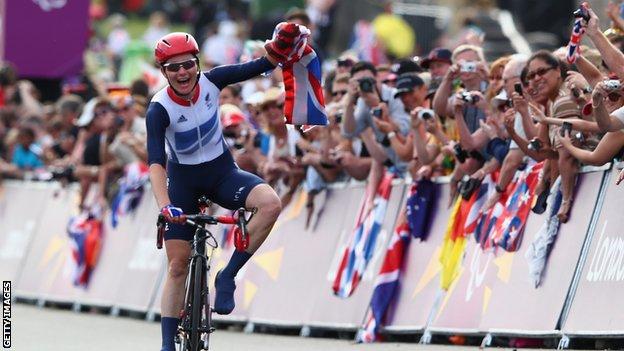 A year on from the start of the Games, she told BBC Radio Manchester that she thinks the Olympics and Paralympics delivered on their promises and have created a lasting impression.

"There were a few areas of legacy that people were looking for from the Games - participation, inspiring a generation and getting more people into sport," said Storey, who has competed at six Paralympic Games in both swimming and cycling.

"I don't think it's just the younger generation. 'Inspire a generation' is any generation.

"From the Paralympic point of view, they were talking about the awareness of disability and how that it could have an impact in a positive way.

"There were a lot of things that we hoped the Paralympics would do. There was a huge amount of pressure on the Games to have this change of people's attitudes towards disability and women's sport.

"We've seen a huge amount of women's sport gaining coverage. The women's football team at the European Championships have had a lot more coverage than we've ever seen before. In general, women's sport seems to be on the up and that's the thing we really need to see improve more and more."

Following her outstanding achievements at London 2012, Storey was one of the 12 nominees for the BBC's Sports Personality of the Year award, and

And she added she has seen evidence of Team GB's success inspiring others to participate in sport.

However, there are fears that in some areas there are not enough facilities for people to get involved in sport at grass roots level, and therefore worries that the legacy of London 2012 will be lost.

If we deliver sport, it has that knock-on effect and it has many benefits. We, as a council, have to make sure we have all the right people in the right places to deliver it

Councillor Jonathan Coupe - the Executive Member for Safe and Strong Communities at Trafford Council - does not share that view. He claims that, in the Trafford area, a lot of the facilities are already in place and believes they can be utilised fully with correct use of the council's budget and the help of the local community.

"We feel we've already got quite a lot of the assets," said councillor Coupe, who also sits on the recently-launched sports and physical activity partnership.

"We already have running tracks in Trafford and facilities for swimming put forward through the Trafford Community Leisure Trust. What we need to do is make sure all the funding that's available goes into the right areas.

"It's not very easy [financially] at the moment and that's why, for example, volunteers are crucial. We saw that during the Olympic Games and we need to continue that theme so that sport is delivered at every level in Trafford.

"If we deliver sport, it has that knock-on effect and it has many benefits. We, as a council, have to make sure we have all the right people in the right places to deliver it."