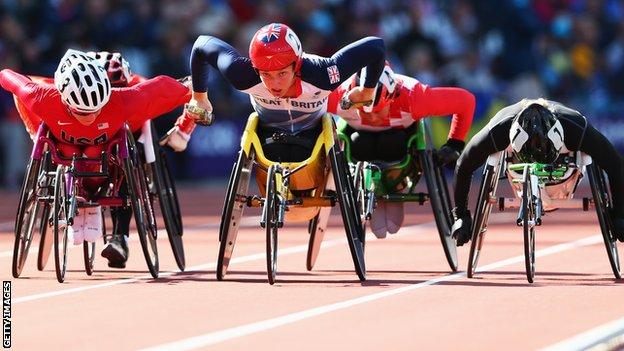 The IPC World Athletics Championships in Lyon, France, is the biggest event for the world's best track and field athletes since last year's sell-out Paralympics in London.

BBC Sport will have coverage across radio, television and online for the competition, which begins on Saturday 20 July

Here is a guide to the main athletes chasing success on each day of the event.

Defending World Champion from 2011 Nathan Stephens is first up in the F57/58 javelin final on the opening morning.

Later, double World and Paralympic champion Hannah Cockcroft goes in the final of the women's T34 200m while Welshman Aled Davies - the discus champion from last year, will compete in the shot put final.

There's also a chance for a first look at sprinters Libby Clegg and Ireland's Jason Smyth in their 200m events while Brazil's Alan Oliveira goes over the same distance. Oliveira is the man who famously beat Oscar Pistorius to gold last summer.

Britain's Paralympic discus champion and former wheelchair rugby player Josie Pearson is the highlight of the morning action on day two while Bethany Woodward, Katrina Hart and Jenny McLoughlin will bid to advance to the T37 200m final.

There is a great duel expected in the evening session with Dan Greaves hoping to defend his F44 world discus title against Paralympic champion and world record holder Jeremy Campbell from America.

Paralympic champions Richard Whitehead and Jonnie Peacock both get their World Championship campaigns underway in Lyon.

Whitehead starts the defence of his world T42 200m title while Peacock will hope to lay down a marker to the rest of the field including Richard Browne and defending world champion Jerome Singleton in the T44 100m semi-finals.

Wales's Aled Davies won gold in the F42 discus at last summer's Paralympics and he will hope to add the World title to his list of honours on Tuesday morning in Lyon while Libby Clegg will start the defence of her T12 100m title.

Richard Whitehead and Jonnie Peacock will hope to figure in their respective finals - the T42 200m and T44 100m.

Teenager Sophie Kamlish and former Wales hockey player turned sprinter Laura Sugar will be in action in the morning in their T44 100m semi-finals.

Paralympic champion Mickey Bushell will hope to better the world 100m silver medal he won in Christchurch two years ago when he starts his campaign in the event.

Stephen Miller, who had a hip operation after London, will be hoping to show he is back to full fitness in his club throw event while teenager Scott Jones makes his major international debut in the F34 shot and Scott Moorhouse goes in the F42 javelin.

Discus thrower Bev Jones gets things underway for the British team on Friday morning as she bids to add to the Paralympic bronze she won last year.

Mickey Bushell will be expecting to challenge for gold in the T53 100m final while Paul Blake is hoping to go one better than he did in London, where he won silver, when he competed in the T36 100m.

Throwers Robin Womack and Kieran Tscherniawsky go in the shot and discus respectively while Bethany Woodward will defend her T37 400m title and Laura Sugar and Sophie Kamlish go in the T44 200m final.

Jade Jones will hope to figure in the T54 final on the final evening of action in Lyon where she is set to come up against American star Tatyana McFadden and her younger sister Hannah.

On the final day of action in Lyon, the spotlight will be on Shelly Woods who will be aiming to go one better than the silver medal she won at the Paralympic marathon. Woods is the only GB athlete competing in the marathons.