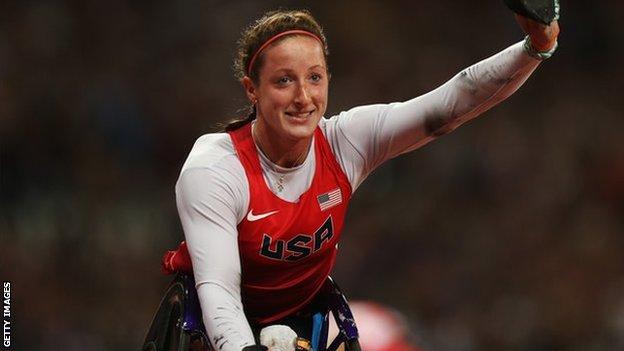 As a Paralympian, I have heard many stories of courage, tenacity and overcoming the odds.

But the story of wheelchair racer Tatyana McFadden is particularly humbling.

McFadden is one of the world's top Paralympic athletes with 10 medals to her name, including three golds at London 2012, and she has also won marathons in New York, Boston and London.

But, as well as her racing successes, she has also made her mark in disability rights and campaigning to make the lives of those less fortunate easier.

For the BBC World Service documentary, The Race for Equality: The McFaddens, I travelled to the United States and met Tatyana and her family to find out more about her life on and off the track.

I had heard of McFadden and her achievements beforehand but we had never met.

Hers is the story of an incredible athlete who from her birth and abandonment in a Russian orphanage has always been battling.

Right from the start she has had hurdles put in front of her, but she has just overcome them and become an inspiring person - someone who never says no or accepts any limitations as to who she is.

Tatyana was born with spina bifida but was adopted at the age of six by American woman Deborah McFadden, who was working for former US President George Bush Sr in the area of disability rights and visiting St Petersburg on an aid mission.

Deborah knew there was something special about Tatyana and brought her back to her Baltimore home where in time she was followed by two sisters from Albania - Hannah and Ruthie. Her adoption started her road to sporting success - but it hasn't been easy.

When she returned to high school after taking part in the 2004 Athens Paralympics, Tatyana wanted to compete in track events against students who didn't have a disability. She was told she couldn't and it led to Tatyana and Deborah going to court and successfully suing the school.

It led to a new law known as Tatyana's Law, which allows all students with a disability to compete in sporting events alongside non-disabled students. It started off in a few US states but earlier this year became a national law.

Tatyana says modestly that all she wanted to do was compete for her school, and for sister Hannah - who is a leg amputee and also competed at the London Paralympics - to have those opportunities too and not have to struggle the way she did.

"The lawsuit was hard to go through that at such a young age," she told me.

"I just wanted to be involved in sport, but some days I wanted to give up because it was tough going to track meetings and getting booed and then going to court and getting hate mail and having paparazzi everywhere.

"It made me grow up fast and also made me understand that I love track and I really wanted to support people with disabilities to help them get involved in sport.

"Nobody should be segregated and told you can't do this, because you can."

Since last year's London Paralympics, the McFaddens have been raising awareness about the Russian ban on US adoptions, brought in late last year, and helping the victims of April's Boston Marathon - a particularly poignant cause as Tatyana won the city's wheelchair race just hours before three people were killed and scores left injured.

Tatyana has also been training hard for this month's IPC World Athletics Championships in France but she is also close to a place on the United States cross-country sit-ski team, which would see her return to the country of her birth for next year's Winter Paralympics in the Russian coastal resort of Sochi.

I was blown away by her welcoming and warm-hearted nature. She is the same age as me (24) but her achievements in all parts of her life are humbling.

She has a fantastic attitude towards life, both as an athlete and in her life beyond sport. She still has so many things she wants to achieve and I think she is unaware of how much of an impact she has had on so many people's lives.

The only sad thing is that in the USA I don't think they fully understand the magnitude of what she has achieved, because the Paralympics have a far lower profile over there than they do here. But this is a story of true greatness and inspiration and I felt privileged to meet her.

The Race for Equality: The McFaddens will be broadcast as an hour-long Sports Hour special on Saturday, 13 July on the BBC World Service at 11:00 BST.

A half-hour version can then be heard across the BBC World Service at various times from Tuesday, 16 July, starting at 05:00 BST, and the podcast will be available here on the BBC website.