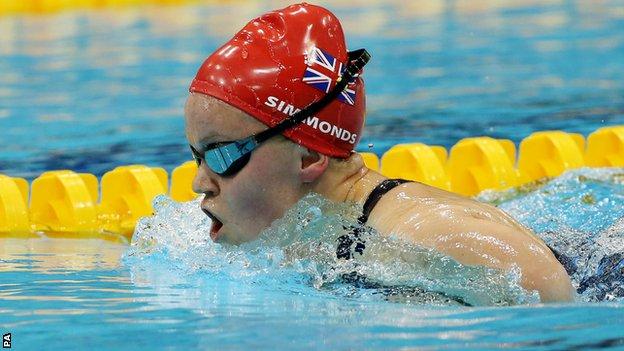 Four-time Paralympic champion Ellie Simmonds hopes a "fresh start" at Loughborough will aid her bid for further success at the 2016 Rio Games.

The 18-year-old, who won two gold medals at both the Beijing 2008 and London 2012 Paralympics, has been based in Swansea for the past six years.

Simmonds will move after the World Championships in August and will also study for a psychology A-level.

"I've had an amazing time in Swansea, but I need a new stimulus," she said.

"After the high of competing at London, I was on such a low when I came back to training and I realised I needed a new challenge towards Rio."

The swimmer, who has achondroplasia - also known as dwarfism - was born in Walsall and grew up in nearby Aldridge in the West Midlands.

In 2006 at the age of 11 she and her mother, Val, relocated to Swansea where Ellie joined leading disability swimming coach Billy Pye.

The move meant leaving behind her father, brother and three sisters and although they travel back regularly, Simmonds now wants to be closer to her roots.

"I moved away from home at an early age - that was my biggest sacrifice really," the 200m individual medley world record-holder told BBC Sport.

"I'm looking forward to just being able to ring home and say 'I'm only half an hour away, can I come home for dinner?' rather than being nearly three hours away.

"I'm sure my family are looking forward to it as well, especially my mum who'll be able to go back to a normal life and see all of my siblings and other family as well."

Quitting Swansea means losing day-to-day contact with long-term coach Pye, although there is a plan for the pair to still team up for international training camps and major championships - such as the World, European and Paralympic Games.

"It will be a shame because Bill has been my biggest supporter and I love the team [in Swansea]," said Simmonds.

"I don't think I would have been able to have the success that I did in Beijing and London without him - he has been my right-hand man and the biggest help in my career, but I think it's time for a change."

She will now work with coach Steve Bayley in Loughborough while also expanding her interests outside the sport.

"I'll be training with able-bodied swimmers at the University of Loughborough and they are all so focused and it's really structured, which I think is great," said Simmonds, who, in addition to her London Paralympic gold medals, also won silver and bronze in 2012.

"I'll also be going into college. I haven't done psychology before; it's new and I wanted to do something that is nothing to do with swimming where I can just get away and learn about people."

Simmonds will compete in six events, rather than her usual four, at the World Championships in Montreal, Canada, from 12-18 August.

The swimmer will add the 100m backstroke and 100m breaststroke to her schedule in what she sees very much as a "test year" and so has lower expectations than usual.

"It is a big experiment to see what it [six events] is like," revealed Simmonds.

"To win medals would be amazing, but I think having had three months off after London [2012] may have an impact so I'm not putting any pressure on myself."