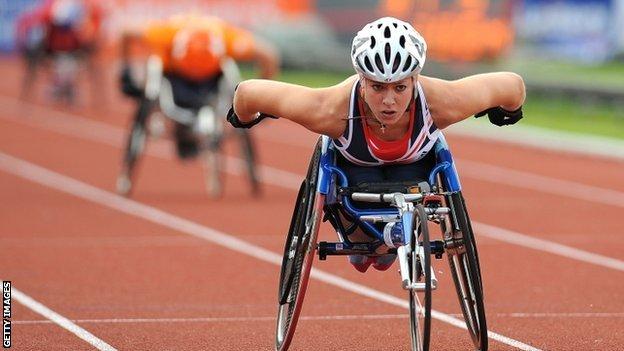 London gold medallists Jonnie Peacock and Hannah Cockroft were among the GB winners at Alexander Stadium.

"There were some very strong performances and I feel confident going to Lyon," Dunn told BBC Sport.

While Peacock set a new season's best in the T43/44 100m and wheelchair racer Cockroft secured a comfortable victory in her T33/34 200m, there was disappointment for Richard Whitehead who false-started in his T42 200m and was disqualified.

"The day was a bit spoiled by Richard's false start in the 200m, but we would prefer it was here rather than in Lyon," added Dunn, a former European and Commonwealth medal-winning sprinter.

"The team did well with a few season's bests, including Jonnie coming back and running a 10.9, so overall it was a pleasing performance by the team.

"I thought Sophie Kamlish ran superbly in winning the T43-46 100m, as did another of our new athletes Laura Sugar, who ran a great PB in the same race. She has only been in the sport for six months and Lyon will be her first major championships.

"To see the British public excited and enthused by Paralympic sport is excellent for us. We had a great 2012 and the plan for 2013 is to make it more exciting and carry on the momentum."

Discus thrower Aled Davies, who finished fourth in Birmingham in a combined F42/46 category against less disabled athletes, will compete in both the discus and shot in Lyon, hoping to add world gold to his Paralympic crown.

"Going into London I was a nobody but - although I am still a youngster in terms of the event - I am now the one to beat, so there will be pressure. But I am looking forward to it," he said.

"Morale is high in the camp and everyone is still on a high from last year. It has inspired a whole new generation of young athletes. It is about getting us out there and showing everyone what we can do."