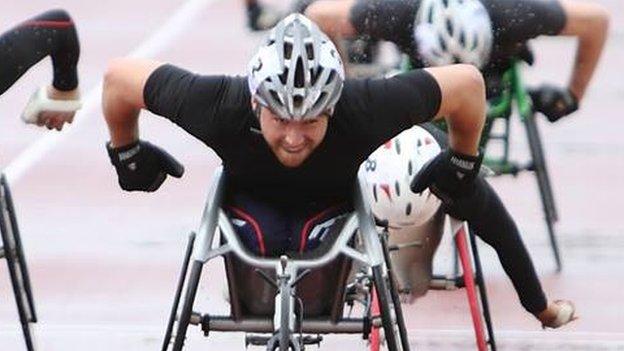 There will come a time when the 34-year-old man they call the Weirwolf will call it a day on his wheelchair racing career.

But on Saturday, lining up alongside him in the 1500m at the IPC Grand Prix in Birmingham, will be the legacy that he desperately wants to leave behind.

Will Smith, half the age of superstar Weir, will compete in the same race as Britain gets a glimpse of the future of the T54 classification.

"When I first started he was the number one guy in Britain and then I met him at a competition in Leeds a few years back," Smith, 17, told BBC Sport.

"It's kind of scary at the start - it's David Weir. But he's a really nice, genuine guy and it's a pleasure to be able to train with him.

"To work with someone like him makes you feel lucky. It doesn't get much better than David Weir."

Amid the midweek joggers and dog walkers at Richmond Park in south London, you may catch a glimpse of Weir, followed closely by his young understudy, as they whizz by in a blur.

Watching them, studying their form and technique, is Jenny Archer, the woman who helped turn Weir into one of the greatest Paralympians of all time and with whom Weir has created

"I feel for these youngsters because they have to work twice as hard as David did to compete," said Archer, who will also see her charge Sheik Sheik, 18, race with Weir and Smith in Birmingham.

"He comes in and gives them time. He gives back what he has got out of the sport and, for me, the recognition he has got should have come earlier on."

Coach, advisor, guru - it is a natural role for Weir, who has and following a physically and emotionally draining London 2012, where he won four gold medals, will not go to this year's World Championships in Lyon.

"When I started I had to learn everything," he said. "I've done it all now so they're skipping a few years and getting a jump start. Hopefully I can get them in the best position."

Yes, everybody wants to be the next David Weir and they all look up to him, but I tell them to be their own athlete

Smith, from Dereham in Norfolk, has had a glittering youth career, taking four silver medals at the 2010 World Junior Championships and, a year later, clean-sweeping the gold medals in the 100m, 200m, 400m, 800m and 1500m.

But opportunities on the international stage are few and far between, with Britain not sending teams to the past two junior championships and then opting not to fill the vacancy left by Weir at the worlds with either Smith or Sheik.

"I'm gutted they didn't select someone for the T54," said Weir. "In terms of competing for Great Britain it seems like they are missing the point a little bit.

"We need to put these young athletes in and not worry about medals.

"Throw them in the deep end and give them that experience. It's only France, it can't cost that much money.

"If they do get to Paralympic standard and they go and they freeze because they're in a massive stadium, it will be because they haven't experienced it before."

Smith, who was born with spina bifida, will be a few years away from competing with the best in the world - with wheelchair racers who depend heavily on upper body strength and generally peak in their late 20s.

But the Paralympic Games in Rio in 2016, when Smith will be 20, are a realistic aim for the youngster.

"Now is the age that makes you or breaks you," he said.

"A lot of athletes drop out now because they've done well at junior and they have to make the transition to the seniors - or you can see it as I do, as a challenge that won't be completed instantly."

The inevitable day will come when Weir draws a close to his racing career and hands over the baton, and with it will come the big question: 'Are you the next Weirwolf?'

"I do get it," Smith said. "'Are you looking to be like Dave?' Obviously I'd like to be, but I'll keep training to be the best athlete I can be.

"There is a gap now. There is nobody like David Weir, but there's a gap and there is potential for me to kick on and move up with my training.

The master believes his pupil has what it takes to make the grade in the most competitive wheelchair classification.

"It's tough to even be in the top 10. It takes years and years of training and he's got that desire," said Weir.

"He was unlucky not to go to the Paralympics, he was just outside of the standard, and knocked 12 seconds off his personal best in the 1500m.

"He'll definitely do it. He's got the desire and his technique is good."

For Archer, the job is relieving the pressure that could come from stepping into the spotlight of the man who sprung wheelchair racing into the headlines last summer.

"Yes, everybody wants to be the next David Weir and they all look up to him, but I tell them to be their own athlete," she said.