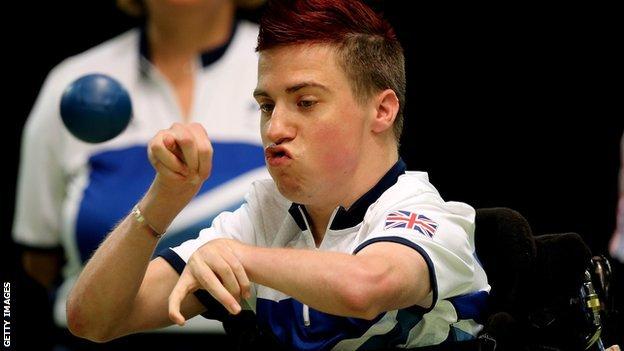 The BC4 pairs squad of Stephen McGuire, Kieran Steer and Jamie McCowan retained their European title.

Jacob Thomas, Jess Hunter and Scott McCowan won their first major medals with bronze in the BC3 pairs event.

However both Hunter and Nigel Murray were beaten in their individual bronze play-offs.

Smith, who was beaten in the BC1 final at last year's London Paralympics, retained his European title with a 6-1 win over Greece's Panagiotis Soulanis.

The 24-year-old had earlier teamed up with fellow London Paralympian Nigel Murray as well as newcomers Emma Goodchild, Joshua Rowe and Martin Davis to win a tight team final against the hosts Portugal, who GB had also beaten to win team bronze in London.

The GB team eased through the pool stages and defeated the Netherlands 9-3 and Slovakia 13-0 to reach the decider but had to battle hard before getting the better of Portugal 5-4.

The BC4 pairs had a more comprehensive final victory, beating Hungary 6-1 while after losing in a tie-break to Greece in the semi-finals, the BC3 pairs recovered to get the better of Belgium 3-1.