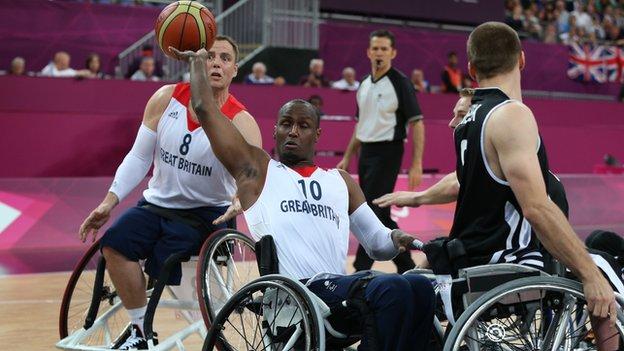 With a new coach and new-look team, the Great Britain men's wheelchair basketball side begin their defence of the European Championship title in Frankfurt on Friday.

The British won their first European title for 16 years when they beat Germany in the final two years ago.

But they lost to the USA in the play-off for bronze at last year's Paralympic Games.

"But now we are all hungry to go out and succeed at the Europeans and retain our title.

"Not winning a medal was a big disappointment for all of us. We had the right players and we just didn't perform on the day. Finishing fourth, you are both so near and so far away from a medal but you learn from your mistakes and move on.

"The future is bright for us - we have five players who didn't play in London who are playing at this tournament and there could be more young players coming in for next year's World Championships."

Coach Murray Treseder left his post after the 2012 Paralympics and has been replaced by his assistant Haj Bhania. Under his guidance the team have warmed up for their title defence with victories against Canada, Spain and Germany.

Great Britain start their campaign against Germany, and the two nations will be expecting to feature in the medal shake-up, along with the likes of Spain, Turkey and Sweden. A top-five finish will secure qualification for next year's World Championships in Korea.

"The games we played over the last few weeks were good to see where we are, and it was particularly good to beat Germany as there is a big rivalry between us and them," said Jama, 30.

"We lost to them in overtime in our opening game at London 2012 and we want to get our own back on them in their backyard this time around."

Somali-born but Liverpool-raised Jama came to the sport as a teenager after he broke his back after a fall from a window. He was part of the team which won Paralympic bronze in 2004 and 2008, was named as co-captain for London last year and is now the sole owner of the role.

"I'm honoured and proud to be captain for the tournament. To have been the co-captain in London was something that I will always cherish.

"I came to Britain when I was six and if I can encourage people to achieve more with their life then that is great. Basketball gave me a second chance and a second life and you need to make the most of what you get, and putting in the hard work does pay off in the end."

The British women are also hoping to win a third European medal in a row, as well as finishing in the top four to reach the World Championships, but key defender Laurie Williams says she wants an improvement on the bronze medals they won in 2009 and 2011.

Six of the squad, coached by Joe Jayaratne and Nigel Smith, are under 23 - including 14-year-old Charlotte Moore, who will make her international tournament debut in Germany, and 18-year-old Maddie Thompson.

"We have improved so much as a team over the past decade but we are still winning bronzes in Europe, which is always a little bit disappointing," Williams admitted.

"We really want to take that next step and get a different colour medal."

Great Britain's women struggled in London, finishing seventh, but Williams says they have a new attitude going to the Euros, where the home nation and the Netherlands will be the favourites to reach the final.

"In the run up to London there was a lot of pressure on us and we perhaps didn't deal with it in the right way," she added. "Then when you lose games and everyone is unhappy, people look to apportion blame.

"But we've put that behind us now and our new coaches have changed things, not just in how we play, but also in our mentality and attitude and things are a lot more positive."