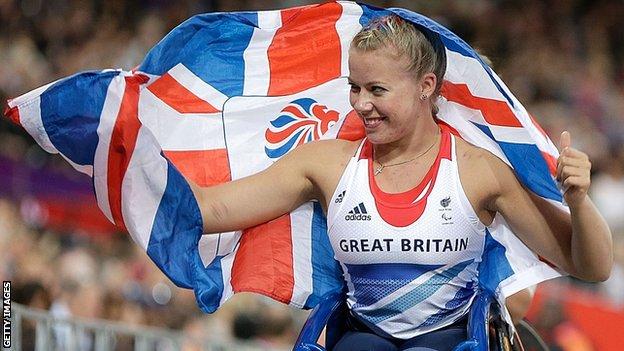 Great Britain have named 28 medallists from the 2012 London Paralympics in their team for the 2013 World Athletics Championships in Lyon, France.

"I'm looking forward to competing with some of the team from London and seeing how everyone's progressed," she said.

"My personal target is to stay double world champion after winning the 100m and 200m in 2011 and hopefully post some quick times out there."

Libby Clegg, 23, also doubles up and will look to add the T12 200m gold to the 100m title she won two years ago in Christchurch, New Zealand.

Peacock, 20, competes at his first world championships in the T44 100m.

Paralympic head coach Paula Dunn said: "There's an exciting blend of young talent and experienced athletes in the team and hopefully this is the building block for 2016.

"London 2012 was a great year for the Paralympic movement with more stars emerging onto the world stage, I'm confident that we will see some more come through in Lyon."

Six-time Paralympic champion David Weir misses the event as he is expected to focus solely on his road racing ambitions.