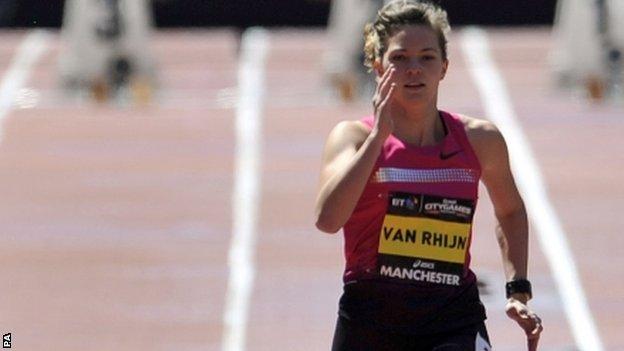 Already 100m world record holder for double leg amputees, her time of 12.96 seconds was 0.02 faster than the T44 mark for single leg amputees set by April Holmes of the US in 2006.

The 20-year-old double amputee set a time of 10.77 - 0.14 faster than the mark set by South African T43 spinter Oscar Pistorius in April 2007 which had been equalled by Blake Leeper of the United States in July 2012.

Oliveira could only finish seventh in the 100m T44 final at the Olympic Stadium in September as the 20-year-old Briton took gold.

The pair will face each other again at July's IPC World Championships in Lyon, with American Richard Browne, who last weekend unofficially equalled Peacock's best of 10.85 seconds, also set to line up against them.

Oliveira beat Oscar Pistorius to gold in the T43/44 200m at London 2012, which prompted the South African athlete to complain about the length of his opponent's blades.

Van Rhijn, who won 200m gold at the London Paralympics, tweeted of her achievement: "So happy to say that I'm now the fastest woman ever on (1 or 2) blades!"