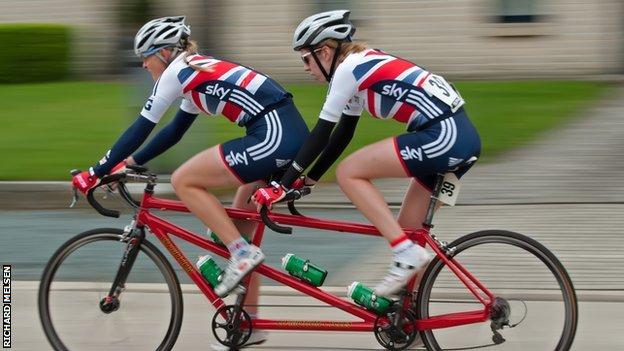 After the success of Jody Cundy and Dame Sarah Storey, Rhiannon Henry hopes she can become the latest Paralympian to swap success in the pool for glory on the bike.

The 26-year-old, who is visually impaired, won Paralympic, world and European medals during her time in the Great Britain swimming squad but after London 2012, where she failed to make the podium, she realised it was time for a change.

Now she is part of the British Cycling Paralympic Academy programme as a tandem stoker - the non-steering rider - and after a successful debut at the Tandem Tour of Belgium last month, will take part in next week's Para-Cycling Road World Cup in Segovia, Spain.

"I hadn't made any decisions about life after London and I got back into training in the pool, but I soon realised I wasn't enjoying it and it was time to move on," she told BBC Sport.

"An opportunity came to try out cycling so I went to the Manchester Velodrome, mainly to see if I liked it, and it has all gone from there.

"Because of the visual impairment, I can't go out on a solo bike, so the only cycling experience I had was just messing about on a bike as a child, although I had done a lot of spin classes to help with my fitness.

"The first time at the velodrome felt a bit like being on a rollercoaster and I screamed a lot as we went around the track but I really enjoyed it.

"I've had to learn a lot in a short space of time, but everyone from the coaches to the tandem pilots have been really supportive and helped me."

Henry admits to having been surprised to have made it so quickly on to the GB squad. Her pilot Fiona Duncan made their international debut together in Belgium where they competed in four stage races and two time trials over three days. They finished sixth and also played a key role in helping team-mates Lora Turnham and Corinne Hall win the event.

"Before I went out to Belgium I was really worried about making the distances," Henry admits. "Fiona and I had only had one road training session in Newport in Wales before going out there, so it was the first time I had done anything of effort on the road - although I had trained indoors on the turbo.

"I surprised myself in that I could do it but I think the fitness I have from swimming transfers well over to cycling. What I now need to work on is my pedalling technique and my application and how best to use the power that I have.

Jody has been a great help because we were on the swimming team together and have stayed friends. He was a key person in getting me to try cycling

"It is a whole new world to me, working with the pilot and also working with team-mates to get a good result and considering tactics and communicating. It was a really good experience."

It is a busy time for the GB road cyclists with two World Cups in two weeks starting in Italy this weekend, where London medallists Mark Colbourne, David Stone, Karen Darke and Rachel Morris are all in action in the first major event since London 2012.

Henry and Duncan will be reunited for the second World Cup of the season in Spain on 14 June, where Henry will be aiming to put herself in contention for a place on the GB team for the World Championships in Canada in late August.

"Fiona and I haven't worked together since Belgium because she lives in Scotland and I am in Wales, but we will go out to Spain a couple of days before the event so we will have some training time together before we race," she added.

"After the World Cup I am moving to Manchester, which will hopefully enable me to have some time at the velodrome with the other tandem pilots.

"I just want to give it our best shot, but Spain will be a good test and we will see where we are. The more race experience I can get, the better it will be for me.

"I'm loving every aspect of cycling and it has reinvigorated me. Training is exciting and I love being on the track and the road.

"It is nice not to have early starts; when I was swimming I was up for sessions at half past five but now 10 o'clock is considered an early start. The tan lines aren't as good though - but I'm working on that!"