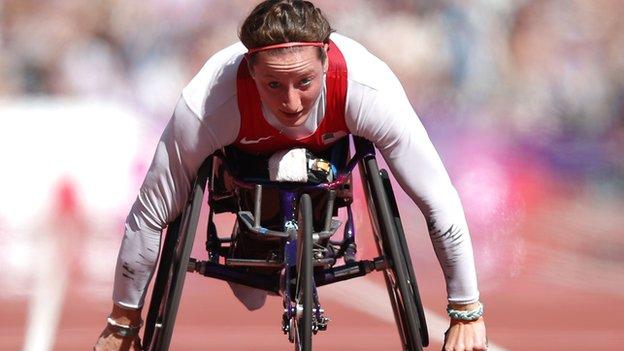 London Marathon winner Tatyana McFadden has told BBC Sport she wants to compete in next year's Winter Paralympics in Sochi.

The wheelchair racer, who won three gold medals and a bronze on the track at London 2012, is targeting a place on the US cross-country sit-ski team.

McFadden, 24, is currently the leading American in the rankings.

"It will be tough - the technique is much different than track and it will be a lot colder," she said.

"I hope to make the team and to give it my all. I love challenges. I will always try my best and see where it takes me."

Selection for the Winter Games would see McFadden return to compete in Russia, the country where she was born.

After being diagnosed with spina bifida and abandoned in an orphanage by her biological mother, she was adopted at the age of six by American Debbie McFadden and taken to live in Baltimore.

McFadden made her Paralympic debut in 2004 and has won 10 medals, as well as triumphing in both the Boston and London Marathon this year. But she has also been vocal about disability rights and human rights, including Russia's ban on US adoptions..

But despite being a relative newcomer to cross-country skiing, McFadden has shown plenty of skill, finishing fourth in her first World Cup race in January in Wisconsin after only a brief introduction to the sport.

"The first time I even thought about trying a different sport was when the coach came up and asked me if I wanted to try out for the team," she admitted.

"I had never done it before and I didn't know what to expect. It is hard but it is a great challenge and I think it will make me a better track athlete. The two go together nicely."

After the IPC World Championships in Lyon in July, McFadden is set to race in the Chicago Marathon in October and the New York Marathon the following month before concentrating on her bid to reach Sochi.

McFadden is not the first wheelchair racer to try their luck in the sport. Four-time London Marathon winner Francesca Porcellato of Italy won gold in the 1km seated sprint event at the 2010 Vancouver Winter Paralympics.

And hopes are high that McFadden can become part of a select group of athletes to have competed in both Summer and Winter Paralympics.

"We are thrilled to have her involved in Nordic skiing," said the sport's Paralympic high performance director John Farra. "We are also excited to see how far she can take the sport."