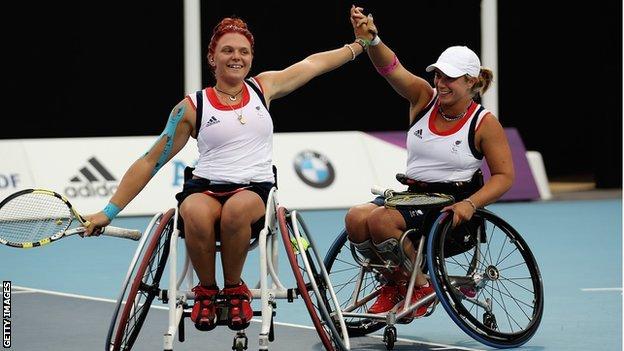 Great Britain's women's and junior wheelchair tennis teams are both through to Friday's finals at the World Team Cup in Antalya, Turkey.

The women beat second seeds and 2011 finalists Germany 2-1 and will face top seeds the Netherlands for the title.

Alfie Hewett and Lauren Jones combined to beat the Netherlands 2-1 in the junior semi-final.

After Jones lost her singles match, Hewett, the world number one junior boy, kept GB in the tie by winning his match and the pair came from 4-2 down in the second set of the deciding doubles rubber to win 6-1 6-4.

They will face Spain in the final aiming for revenge after the Spanish team beat them in the group stage.

Whiley gave GB a good start in the women's semi-final with a three-set victory over Katharina Kruger but Shuker found world number three Sabine Ellerbrock too strong and lost 6-3 6-1.

But the British pair dug deep in the doubles to sweep the Germans aside 6-1 6-2 and set up a meeting with the 25-time winners who have dropped just one set in their three matches so far.

However, the GB men were edged out of a place in their semi-finals after losing 2-1 to Sweden and they will play now play Austria in their first play-off contest in their bid to finish fifth.

David Phillipson lost 6-2 6-4 to Peter Vikstrom but Gordon Reid kept the tie alive by beating Stefan Olsson for the loss of just one game.

But Marc McCarroll and Reid lost out 11-9 in a third set championship tie-break to Olsson and Vikstrom.