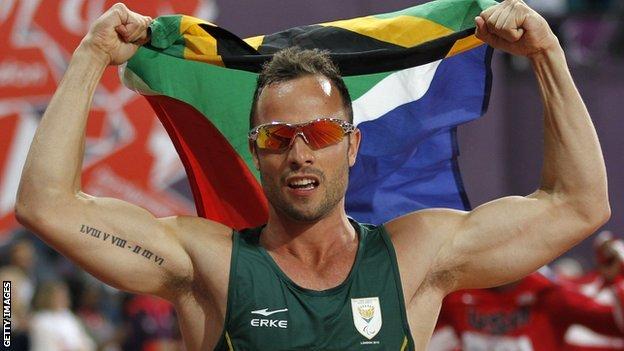 Paralympic gold medallist Oscar Pistorius will not compete again this year as he awaits trial for murder.

Pistorius, 26, is on bail after being charged with the murder of girlfriend Reeva Steenkamp but can compete before his court case is heard.

His agent, Peet van Zyl, said the six-time Paralympic champion was not mentally ready to return to the track.

"There was never any pressure from me or his coach (Ampie Louw) to return, it's his decision," said van Zyl.

• His parents, Henke and Sheila, were advised that having the amputation done before he had learned to walk would be less traumatic

It means the South African will not compete in the IPC World Championships in Lyon in July.

Pistorius was arrested after shooting Steenkamp dead on 14 February and has not competed since.

The double amputee, known as Blade Runner because of the carbon fibre prosthetic blades he races in, claimed he mistook Steenkamp for a burglar and has denied murder.

On 22 February, Pistorius was granted bail and had certain conditions lifted which meant he could compete in events outside his homeland.

Coach Louw was quoted by Eye Witness News in South Africa as saying his athlete was "nowhere close" to being in a position to train.

Pistorius had not been invited to compete in July's London Anniversary Games, with UK Athletics chairman Ed Warner saying he did not want the meeting to turn into a "media circus".

However, Pistorius's agent said plenty of meeting organisers had been in touch to invite Pistorius to compete in their events.

"[There] were a good number, enough to keep him busy through the year," added van Zyl.

At London 2012, Pistorius became the first double amputee to run at an Olympics, taking part in both the 400m and 4x400m relay.

He is next due in court on 4 June and a trial is expected to take place before the end of this year.