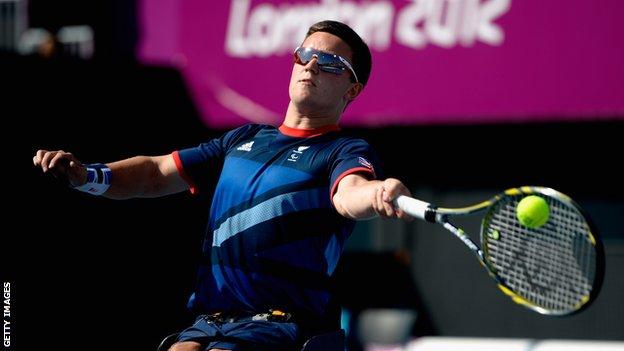 British men's wheelchair tennis number one Gordon Reid won his third tournament of the year with victory in the Internazionale d'Italia in Rome.

The title is a timely boost for world number six Reid. The Scot, 21, will be part of the British side competing at the World Team Cup in Turkey, which starts on Monday.

The Rome event took place alongside the ATP and WTA tour events.

Reid, who started playing wheelchair tennis in 2005 after contracting a virus, has also qualified for his first Grand Slam singles event at the upcoming French Open at Roland Garros from 5 June.

In Turkey, he will be part of the GB men's team alongside Marc McCarroll and David Philipson while London doubles bronze medallists Jordanne Whiley and Lucy Shuker make up the women's team with Louise Hunt.

The quad team is made up of Jamie Burdekin, Antony Cotterill and Adam Field while world number one boys player Alfie Hewett teams up with Lauren Jones and Luz Esperanza Merry in the junior event.

Reid booked his place in the Rome final after an easy 6-0 6-1 win over Austria's Martin Legner while Houdet was a comfortable winner over Dan Kleckner to set up a fourth match between the pair this year.

Although Houdet took the opening set, Reid recovered well and claimed his second win of the year against his French rival.