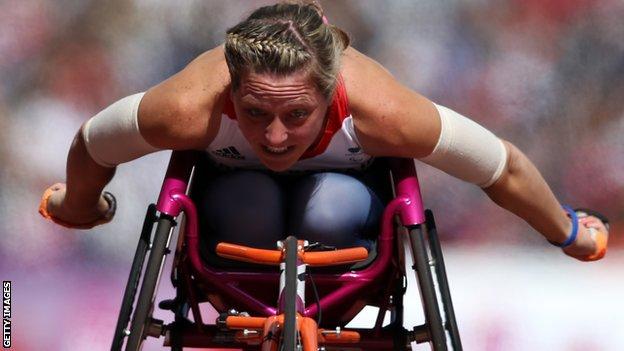 Paralympian Mel Nicholls has revealed that the race in which she broke the 1500m T34 world record was only meant to be a training exercise.

As a wheelchair sprinter, she usually competes over shorter distances and admitted she was shocked by her record.

"I can't quite take it in," said Cheltenham-based Nicholls.

"It was the end of the competition and I decided it would be good to work on the techniques for the races I do regularly.

"I've only raced at 1500m once before and it was a practice race to help out someone else.

"It was quite a surprise, but a nice one."

Nicholls first got involved in athletics in 2010 as she searched for a suitable sport to compete in following her initial recovery from a series of strokes.

She made her Paralympic debut at London 2012, competing in the heats of the T34 100m before qualifying for the final of the T34 200m and finishing seventh.

The 35-year-old will now turn her attention to qualifying for the World Championships in Lyon in July.

"I need to peak in June or July, but the fact that my times are getting better is good news," Nicholls told BBC Gloucestershire.

"It's such an amazing feeling and it will give me confidence. You know the work that you've put in over the long, cold winter has paid off."