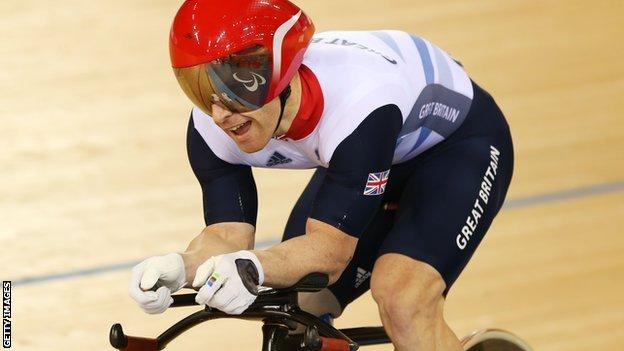 Norfolk, 38, is a former tandem sprint pilot and assistant coach of the GB Olympic sprint team.

He also worked as Cundy's coach at the Beijing Games, where he won two gold medals.

"Jon knows the set-up really well and it seems like a natural progression for him," Cundy told BBC Sport.

"But it is tough to be a para-cyclist at the moment. We had an amazing Games but now we are in a worse situation than we were before London. I don't know how it is possible for a sport to go backwards since 2012 but cycling has managed it."

Norfolk takes over from Chris Furber, who moved to British Swimming as their new Paralympic Performance Director after guiding the GB para-cycling team to World and Paralympic success, including 42 Paralympic gold medals.

He comes into the GB programme with no major track championship planned for the team until Rio - a situation which is frustrating for track specialist Cundy, who has switched his focus to aiming for a place on the England team for the kilo event at next year's Commonwealth Games in Glasgow.

"From Jon's perspective, he comes from a track-based programme which had a lot of active racing to a programme where this year's main focus is the Road World Championships in Canada in September and some Road World Cup races, but they are pretty small events," he admitted.

"It is always the same a year after the Paralympics but it is worrying that a few road events this year have been cancelled.

"Jon will have to focus more on the GB road riders and develop them but the biggest challenge for him will be to keep everyone on the squad motivated.

"Chris set the benchmark high with the number of medals he has won and Jon has a tough act to follow, but he is more than capable of doing the job.

"He is very methodical and on the ball and straight-talking. He has also got the knowledge of competing at elite level for the GB track sprint team at World Cup level, and that is good experience to bring to the squad.

"The events he used to ride are similar to what I do and to have someone with that experience and sprint knowledge is definitely good for a rider like myself.

"But it is also easier for the transition for the whole team when it is a familiar face taking over and it is business as normal.

"Since he has been announced as the new lead coach, Jon has been speaking to all of the riders discussing what we are going to do and his plans for the programme."

Cundy has been vocal about the lack of track events on the calendar and believes the International Cycling Union (UCI) must do more to promote para-cycling or possibly risk losing athletes to other sports.

"Since the start of the year there have been rumours of events, but that is as far as it has got," he insisted. "Nobody at the UCI seems able to confirm when the next track races will be, and that is a poor situation.

"I keep talking to the UCI and everyone seems aware of the problem but nobody seems to know what to do. They have a para-cycling department and it shouldn't be me telling them what to do in terms of active promotion."