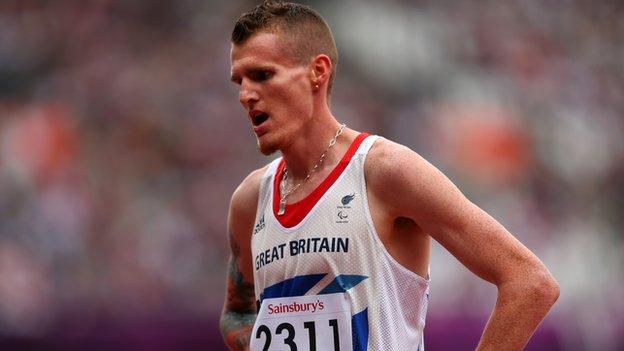 Devine, 21, has been struggling with an ankle tendon injury and must wear a protective boot for the next month.

It leaves him battling to compete in the Worlds in Lyon as well as two high-profile summer events in Birmingham and London's Olympic Stadium.

"It is hard to deal with but there is nothing I can do," he told BBC Sport.

The Liverpool Harrier, who is blind in his left eye and has 20% vision in his right eye, was hoping to compete in the IPC Grand Prix Final at Birmingham's Alexander Stadium on Saturday 29 June, before the Lyon competition, which starts on 22 July and the London Anniversary Games on 28 July.

But the tendon injury, which he picked up while on a training camp in Kenya with the rest of the British Olympic and Paralympic endurance athletes in January, has proved more troublesome than he originally expected.

"Since the Paralympics I've had one niggle after another and in Kenya I damaged one of the plantaris tendons around my ankle," he added. "I have had cortisone injections and that helped for a short time but the pain returned.

"Wearing the boot will hopefully let it settle and when I go back to the doctor at the end of this month and if all goes well with the scans, hopefully I could be back jogging.

"But by then it will be the start of June and Birmingham will be less than a month away and the Worlds will be soon after that.

"If the boot doesn't work then I might need to have an operation to remove the tendon.

"I've had so many knocks this year that I'm not in good shape but while there is still a chance of competing I will keep working hard."

Devine, who took 14 seconds off his 1500m personal best in 2013 and now has a best time of three minutes 49.79 seconds, knows he needs to take another seven or eight seconds off to have a chance of competing against the best sighted runners in the country.

But the Liverpool fan admits that he gained plenty of encouragement from double Olympic champion Mo Farah, who was also part of the Kenya training squad.

"To see what Mo does in training was fantastic and he gave me so much help, especially with my strength and conditioning, and had plenty of advice for me," he said.

"He is the best athlete in the world and has done so much to raise the profile of distance running so to able to sit down and chat with him is so important for a young athlete like me.

"A lot of people are saying that it is good this injury didn't happen last year but it doesn't make it any easier. After last year, I really wanted to push on this year.

"But I have to try not to get too down about it because you can't change anything. I've got an injury and if I sulk about it, I won't be fun for anyone to be around."