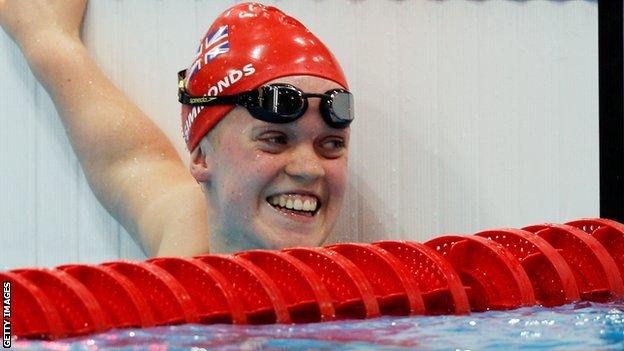 Veteran Sascha Kindred, 35, has been selected for the seventh world championships of his career.

The event takes place from 12-18 August in Montreal, Canada.

There is no place in the squad for Beijing 2008 100m breaststroke champion and London bronze medallist Liz Johnson, as well as Athens gold medallists Nyree Kindred and Natalie Jones, who were all relying on reprieves from the British selectors after failing to attain the qualifying times at last weekend's trials in Sheffield.

Teenager Amy Marren, 14, who was one of the stars at Sheffield, beating her own European record in the SM9 200m individual medley is also named while former able-bodied swimmer Stephanie Slater will be one of a number of international debutants in Canada.

Slater was hoping to make the British Olympic team before suffering nerve damage in 2011 which left her without the use of her left arm.

But the 22-year-old from Preston returned to the pool late last year and in Sheffield set a new European record in the S8 100m butterfly to help secure her place on the team for Montreal.

"I had an amazing trials, having only been back in the water since November, so to do the times I was totally blown away by and it's not really sunk in yet," she told BBC Sport. "I've swum quick, but I've still got that drive and determination to go even quicker.

"It's a swimmer's dream to be up there on the podium and I'd love to be up there and it's one of my main goals so I'm going to get back into the pool, train hard and see what happens."

Simmonds will renew rivalries with S6 American rival Victoria Arlen at the event after the pair fought out two tremendous races at the London Paralympics, with the Briton winning over 400m freestyle while Arlen triumphed in the 100m event.

"After London I've had a few months out and this year is just a tester year to try out new things and new events and I want to go out there and do personal bests in all events."

"It's a really big honour to be chosen and to be representing my country again at my third world championships," said the 18-year-old, who is hoping to compete in six events in Canada.

"It's a great team heading out there who will hopefully do exactly what we can in Montreal to showcase all the talent we have so it's very exciting.

"It's a lot different, the Paralympics are every four years and it's a big event where it's not just swimmers it's all different sports and in a village as well but World swimming is also a big thing and everyone is at the elite level and it's going to be a tough competition but it's going to be really good as well.

"It will be tough and I'm sure Victoria Arlen's going to be in top form as well as new people, so it's going to be tough but hopefully really exciting to do all six events in a very packed programme."