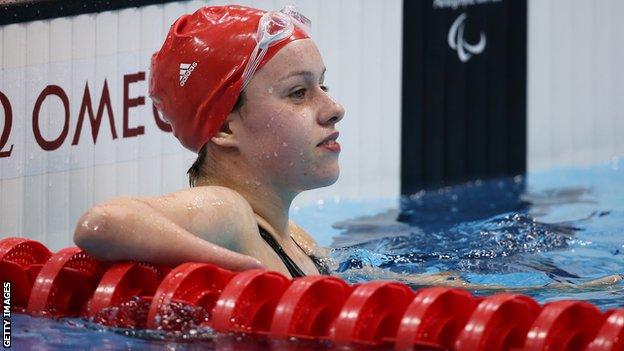 The 14-year-old won the 50m freestyle in 30.06 seconds to give her a boost ahead of August's event in Montreal.

"It's been a great competition for me and I'm really proud," said Marren, who reached two finals at London 2012.

"I think it's been a brilliant week and I've really enjoyed the racing," Marren, who finished the competition with 10 medals, told BBC Sport.

"I was just looking at personal best times this week and obviously qualifying on the first day in the 100m free I was over the moon as I didn't expect to qualify in that and the rest of the events just followed."

Paralympic S14 200m freestyle champion Applegate, who is keen to compete against able-bodied rivals, could have the chance to do that on the national stage later this year.

The 16-year-old, who has Asperger's Syndrome, won the 50m freestyle B final in 27.79 seconds, which is inside the qualification time for the British Youth Championships at the end of July while Hannah Russell also qualified for the event thanks to her time of 27.91.

Walker, 35, won the men's multi-classification 50m freestyle in 28.50 seconds while Henshaw, who won silver in the SB6 breaststroke in London last summer, secured her World qualification time in Sunday's heats with a time of one minute 40.91 seconds before lowering that further to 1:40:24 in the final.

"It's really good and I've had a good meet which is a good step towards the Worlds. I'm enjoying my swimming and going fast which is important," said Walker.

"This afternoon I had the luxury of just enjoying the race and that's why I was able to go quicker," added Henshaw.

"I've waited until the last day and it's hard to wait when everyone else is getting their times, but I'm just happy I've got it."

However Henshaw's team-mate and 2008 Paralympic champion Liz Johnson failed to achieve the qualification time in the same event.

"I'm gutted not to have made the time and I'm disappointed not to convert my morning swim," Johnson told BBC Sport.

"Everyone knows I can convert and it is only in the last year or so that I've struggled so I will have to work out why.

"Sometimes when you miss a time it is a sign your career is over but I think a lot of people will agree that the standard is so tough in our event that it isn't career over.

"I might have to sit out this World Championships unfortunately."

Former national championship able-bodied swimmer Stephanie Slater, who set a European record in the 100m butterfly on Friday, sealed her third World Championship qualifying time of the competition, this time in the 100m breaststroke.

The British squad for the IPC World Swimming Championships will be announced on Tuesday.