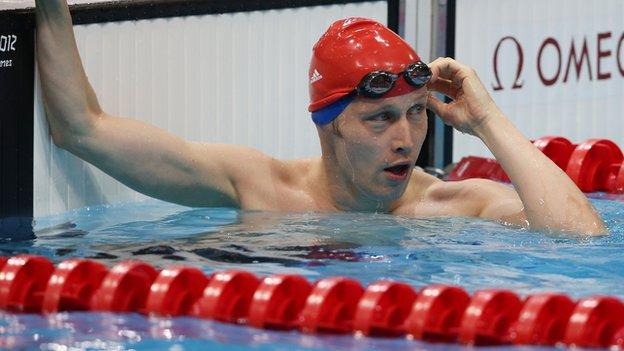 Paralympic swimming veteran Sascha Kindred will compete at his seventh World Championships later this summer after securing the qualification time.

The 35-year-old, who was expected to retire after winning silver at London 2012, says he is not yet ready to quit.

"I'm going to keep pushing until my body tells me it can't do any more," Kindred told BBC Sport.

His achievement was all the more impressive given he was involved in a high-speed car crash in March and has struggled with illness leading into the British Championships in Sheffield.

I'm getting the right attitude for racing now and I think that's behind my improvement.

"Crashing my car at 70mph, I was lucky to walk away really and obviously someone was looking down on me thinking I still have something else to do," said Kindred, who is also hoping to qualify for August's World Championships in Montreal in the 100m breaststroke on Sunday.

He added: "I'm loving being back in the water and doing what I do - my family are very supportive and if I can go to the Worlds and do a personal best there, then who knows what can happen."

Former able-bodied swimmer Slater, who only began swimming again in November after spending two years recovering from nerve damage, secured her second World Championship berth this week with a time of 2:10:31 in the 200m individual medley.

"It's been amazing really because I wasn't too sure what to expect coming into it, but I have been training really hard and knew a good time was in me so it's really good," Slater told BBC Sport.

In the same event, which was won by Applegate, SM6 Paralympic champion Ellie Simmonds also attained the World Championship standard - as did 14-year-old pair Marren and Chloe Davies.

Marren has been one of the stars of the British Championships, winning three medals over the opening two nights, and she continued her form into the third day - lowering her own European SM9 200m individual medley record in both heats and finals.

The swimmer's 2:33.34 from the heats would have landed her Paralympic gold last year, while her 2:32.74 from the final is the fastest time in the SM9 classification since 13-time Paralympic champion Natalie Du Toit won the 2010 IPC World Championship title.

"It was a good race, I enjoy the IM [individual medley] the most because it's such an exciting race to be in and there's never one clear winner the whole time," said Marren.

"I've been enjoying my swimming so much and I'm getting the right attitude for racing now and I think that's behind my improvement."

Davies, SM14, attained her second qualifying time with a British record 2:32.05 in the 200m individual medley.

Mullen, S5, clocked a European 50m butterfly record as he finished fourth in the multi-classification final in 39 seconds.