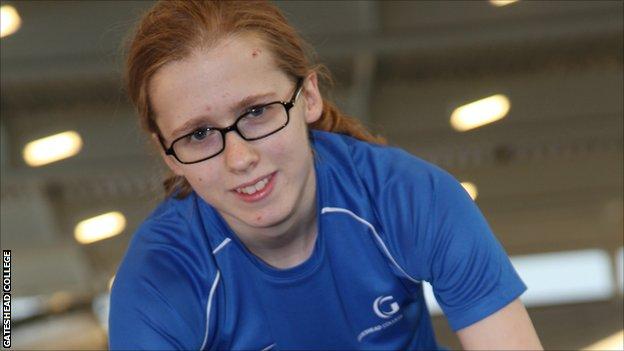 Chester-le-Street para-athlete Stephanie Moore says there is enjoyment rather than pressure in representing Great Britain at the Inas World Athletic Championships in June.

The 18-year-old, who specialises in the 100m, will also compete in the 200m and relays at the event in Prague.

"Just being selected is an amazing achievement," she told BBC Sport.

"I just want to go down there, have some fun, compete well and enjoy because I might not be selected again."

Moore was diagnosed with severe language and learning difficulties because of second-level autism at the age of five.

However, she has been able to compete at international level through Inas, a federation that organises athletics events for para-athletes with an intellectual disability.

Like most athletes or para-athletes, Moore would love to be involved when the Rio 2016 games come around.

"I'd love to go to Rio, but I've not decided to train for it yet.

"It's all down to funding and qualifying time, and what event to do, as with my classification they've only got specific events but they are adding some new ones.

"If they put my event in then I will have to consider whether to go for it."

She made her first appearance for Great Britain at the World Indoors at Manchester, and said receiving her kit was "like Christmas".

Moore continued: "I was thinking 'I'm actually going to be representing Great Britain'. It's really exciting and I always feel really proud when I have it on."

She brought home a gold medal from the trip to Manchester in the 4x400m indoor relay, as well as a treble of European silvers in the 100m, 4X100m relay and 4x400m relay in Stockholm.

"We got the world indoor title, we destroyed other teams by 10 seconds, it was a great feeling to get an international medal.

"It's a great opportunity to be in a relay team, you get to know your team-mates well, you get more fun out of relays and there's drama in it too," she said.

Moore balances studying at Gateshead College with her athletics training, but her ability to continue competing rests on finding funding from local sponsors.

"Going to the World Championships in Prague this year will cost more than £1,000. I have a sponsor in Dean Taxis and I am thankful.

"That pays for everything, getting there, flights, hotel, entry fees, kit, I've had to pay for it all. I am constantly applying for grants, so I'm thankful," she added.