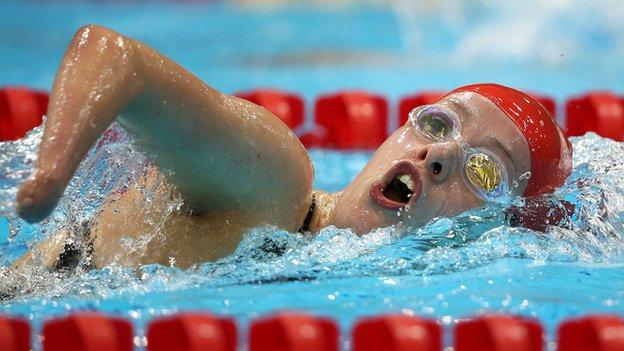 With a messy bedroom and a love for chart music, her pet dog Paddy and social media, Amy Marren is like many other 14-year-olds.

The Essex teenager beat her own European record in the 200m individual medley in the S9 category in a time which would have won her gold at London 2012. The time also makes her the second-fastest swimmer of all-time in the category behind South African great Natalie du Toit, who retired after London.

She also achieved the A qualifying times for Montreal in the 100m freestyle, 100m backstroke and 400m freestyle, as well as a B standard and personal best in the 50m freestyle.

Amy's performances in Sheffield show how much she has learned from London 2012 and she is getting so close to the times that Natalie du Toit set in the category.

She will go to Montreal as a medal contender which will be the next test for her. She has stepped up well but now she will be the one to beat.

However, she is calm and cool and doesn't appear to be phased by it all and I hope she goes and wins some medals.

Despite her age, she performs like a far more experienced swimmer and that is exciting because who knows where she will be in 10 years time if she continues to improve?

But after a weekend which yielded 10 medals across the senior and junior categories, Marren was back in her home pool on Monday morning before a day's school work at Hall Mead School in Upminster.

"It has been a brilliant week and I've enjoyed all of my racing and the atmosphere has been great," she told BBC Sport.

"I was just looking at swimming personal bests coming into this week so to qualify for the Worlds in my first event on Thursday - the 100m freestyle - was great and the rest of the events just followed.

"London has driven me forward and I'm enjoying it a lot. I think the biggest change for me has been in the way I think before I swim. I now go into races enjoying it more. In the past I got nervous but competing in a home Paralympics is the biggest thing you can do, so the way I see it, you will never have the nerves that you have at a smaller competition because you have competed in such a massive event."

Marren, who was born without her right hand, turned 14 just before making her Paralympic debut in London. She was cheered on by a large group of family and friends, including mum and dad, Jo and Andy, and sister Georgia (10), reaching the final of the 400m freestyle, where she finished fourth, and the 100m backstroke, where she was sixth.

But Andy told BBC Sport that it was watching another teenage Paralympic star in action that helped inspire his daughter to achieve her goals.

"Amy had learned to swim as a child but we watched the 2008 Beijing Paralympics on television and saw Ellie Simmonds on television winning gold aged 13. We told Amy that she could do that and I think it struck a chord with her and sold the sport to her. She has progressed really well since then," he said.

Marren is one of a group of talented teenagers, including Hannah Russell (16), Chloe Davies (14) and Jessica-Jane Applegate (16), who are all set to be named in the GB team on Tuesday and hoping to build on their London 2012 experience.

London [2012] has driven me forward. I think the biggest change for me has been in the way I think before I swim. I now go into races enjoying it more

"It's a great squad and I love being part of it," Marren admitted. "But having people around my own age who are going through the same things, like trying to combine training and schoolwork, is fantastic because you can talk to them and not have to be too mature. I think it helps all of us.

"It's really great to see my friends do so well and as soon as we all got our qualifying times in Sheffield we were so proud of each other."

Sunday was a particularly busy day for the Marren family with Georgia competing at another swimming event in Barnet Copthall, meaning Jo had to drive her down from Sheffield while Andy was supporting Amy in her final day of competition.

"Sometimes it is like ships passing in the night with the girls needing to be in different places at the same time," he admitted.

"As a parent, it is important to keep Amy grounded but she is quite modest and I think having other teenagers on the GB squad helps as they have bonded together well. Some of the older members of the squad have come up and told me she is a pleasure to have around, and as a parent that is really good to hear.

"She is quite laid back at times but she knows there is still a lot of work to do.

"The support network is key and the help we get from the school, everyone at Romford Town Swimming Club and British Swimming has helped us so much.

"We are very proud of her and over the last 12 months there has been a lot of hard work, but the Games has given her more ambition to go and push it further."