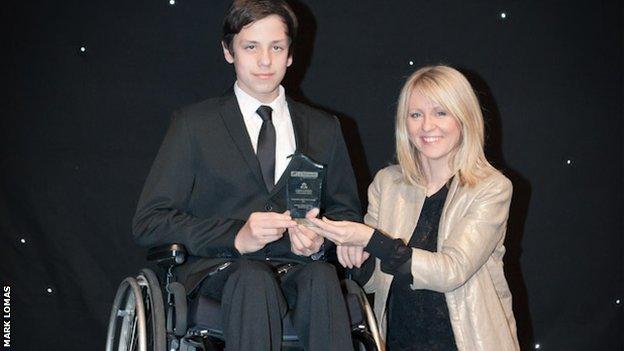 Some of Britain's young talented disabled athletes have been honoured at a ceremony in Manchester.

Among the winners at the Nationwide Disability Sports Awards were Paralympic swimming champions Ellie Simmonds and Josef Craig.

2012 Paralympians from boccia, athletics, wheelchair fencing and sitting volleyball were also among those honoured.

Other winners are hoping to be part of the GB team at the 2016 Games in Rio.

The lifetime achievement award, named in memory of former Paralympian and disability sport photographer Graham Bool, went to Dr Derek Martin, who has been a regular feature at disability swimming competitions and was also the British Swimming doctor at London 2012.

Welsh swimmer Jack Thomas, who competes in the S14 category for intellectual impairments, was honoured for his performance at the DSE Junior Swimming events during the year.

"I'm thrilled to have won the award," the Swansea-based 17-year-old told BBC Sport. "I only found out a couple of weeks ago that I had won it.

"I missed out on a place at the Paralympics by 0.2 seconds but I was on the inspiration camp at the Games and saw five days of the swimming.

"The atmosphere in London was amazing and I want to be there in 2016. I need to race hard and work my way up next year and hopefully be selected for next year's World Championships in Canada."

Paralympian Julie Rogers, who was the youngest member of the British team at London 2012, won one of the 10 Rising Star awards and was delighted with the accolade at the end of a memorable year.

"It's a great honour and I'm really appreciative of the support," said the 14-year-old sitting volleyball player. "It is really inspiring to see what other young athletes are achieving in their sports.

"Competing at the Paralympics was the best experience of my life so far and I hope that will help motivate other youngsters to train hard and see what they can achieve."