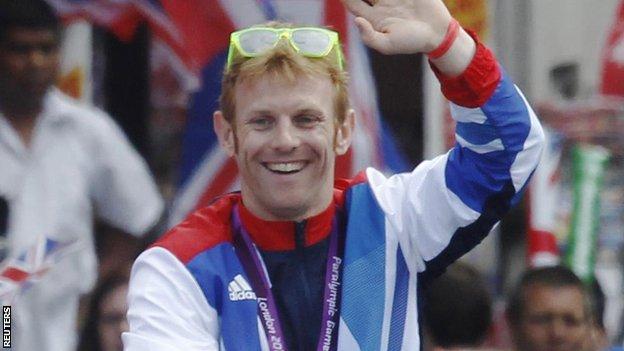 Paralympics cyclist Jody Cundy has admitted he faces the biggest challenge of his career to win a place in England's Commonwealth Games team.

The 33-year-old from Wisbech, who switched to cycling from swimming, wants to compete in Glasgow in 2014.

"It's kind of shooting for the stars," Cundy told BBC Radio Cambridgeshire.

"For me, as a Paralympian, to even contemplate that idea means I have to be in the very best form I've ever been in plus an extra one or two per cent."

He has won five Paralympics gold medals and 11 world titles in swimming and cycling since beginning his sporting career and was appointed an MBE in 2009.

However, Cundy had to settle for a single bronze in the individual C4 pursuit at the recent Paralympics in London.

It came just a day after he reacted furiously to being disqualified from the 1km time trial after his rear wheel slipped leaving the starting gate.

With no major international events next year in disability sport, Cundy has instead turned his thoughts towards the Commonwealth Games, even though he acknowledges that breaking into England's team when the selectors already have so many top-class cyclist to choose from may be "unrealistic".

Fellow cyclist Sarah Storey and archery's Danielle Brown became the first disabled athletes to represent England at the Commonwealth games when they competed in Delhi in 2010.

"When you've had people like Oscar Pistorius and Sarah Storey make international, elite, able-bodied events, it almost seems like anybody can do it," said Cundy.

"But not just anybody makes a Commonwealth Games, or an Olympic team, or a World Championships team.

"This is the biggest thing I'm ever going to aim for, but I'm going to enjoy the process of the hard work and dedication that's going to go into it.

"If I don't achieve it, I'm still going to move para-cycling on, purely in terms of the training I'm going to do to to try and be as fast as possible."