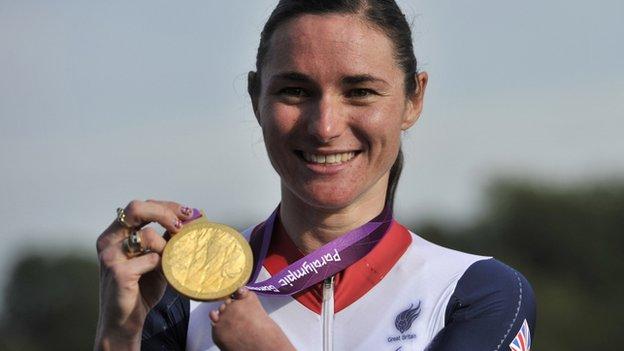 The curtain has come down on what has been widely praised as the best Paralympics of all time.

Crowds packed into the venues to cheer on the British competitors, including cyclist Sarah Storey, who won four cycling gold medals to become Britain's joint-most successful Paralympian of the modern era.

BBC Sport spoke to some key figures about how they viewed the Games and how they see Paralympic sport making an impact in the future.

In the short term, the impact that this Games have made has been incredibly positive. We have got an incredible momentum around people's understanding that this is great sport.

It has been very successful in making people realise that disability is not the issue - it is the quality of the individual and their ability to do things that matter.

The task is to see that as being more than short-term and not letting it fall away, and make sure there is the focus and drive to maintain a public attitude that is positive towards the Paralympic Games. I am convinced we will never go back to a time where there is disinterest in Paralympic sport.

We have seen packed-out heats and finals for 10 days in the Aquatics Centre and in the Olympic Stadium, and if that doesn't change some people's perceptions of the sport, then what will?

We have had good listening figures on the radio and watching on TV, and that must have a positive influence on the perception of the sport.

But there have been some issues that will damage the credibility of the sport, especially around classification, and we need to get these things sorted before we get to the next Games, otherwise from a high point for the Paralympic movement, people's interest in the sport could drift away.

I have had so many messages of support from home and we hope that support will continue in the dark winter months when we are back in training. I went to Barcelona in 1992 as a 14-year-old swimmer and, since then, Paralympic sport has evolved and been embraced by the wider public as a whole and it has been great to be part of the journey and seen the changes.

People are now starting to see Paralympics as elite sport and not seeing it with disability, impairment levels or anything like that, and seeing world record after world record.

It seems that a positive Paralympic sporting legacy could already be alive and kicking as individuals start taking it upon themselves to organise disability sport. And not necessarily through the expected channels.

On Thursday night, on the way home from the Olympic Park, my taxi driver told me: "I have really enjoyed the Paralympics, especially the blind football. Actually, my son came home from school today and told me he'd played it. The PE teacher blindfolded the pupils, put a bell in the ball and the kids loved it."

People are now talking about athletes and not poor disabled people.

After Dave Weir won his 800m race, Olympic road cycling gold medallist Brad Wiggins and television presenter Lorraine Kelly were tweeting about the race. People of that sort of stature on the outside had never watched the sport in that way before.

I don't care if some people came here because they didn't get Olympic tickets - I think spectators have been blown away by the level of sport. There are some classes weaker than others, but that happens at the Olympics.

It won't change the attitude to disabled people outside of the Games; however, we will see athletes get big sponsorship deals, lots of media coverage and it will change their lives.

I think what is obvious with the packed stadiums and also relatively huge television audiences is that people have understood the Paralympics and that the Paralympics have found a new audience.

Paralympic sport is on a huge upward curve in term of performances, support and advertising. I think the Games as a whole have been really positive and probably a seminal moment for Paralympic sport.

The London Paralympic Games will be remembered as a time when we saw ability first and disability second.

We will reflect as we move through London and on to Rio and great success. We want to build on that. We've already started the planning. We're confident we can move into big investment decisions this autumn for Paralympic sports and the Olympic sports and we'll maintain this momentum so that we can do even better in Rio.