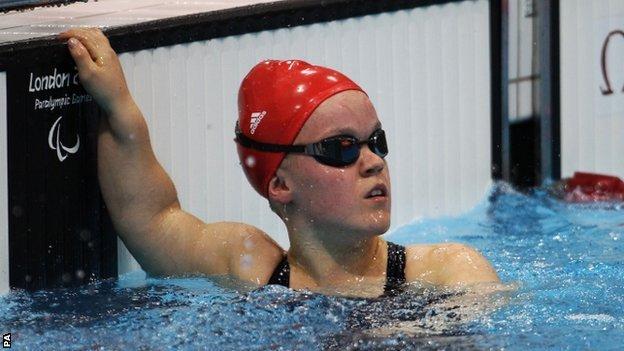 A sport-by-sport round-up of how ParalympicsGB athletes perform on Day 10 and 11 of the 2012 Paralympic Games in London.

Nathan Stephens manages a distance of 33.10m in the javelin throw F57/8, meaning he finishes in 12th place.

SILVER MEDAL - David Smith loses 7-0 to Thailand's Pattaya Tadtong in the final of the mixed individual BC1 event.

Lora Turnham and pilot Fiona Duncan finish eight in the women's individual B road race with a time of 1:45.22.

SILVER MEDAL - Ellie Simmonds grabs silver, her fourth medal of the Games, in the women's 100m freestyle S6 in a European record time of 1:14.82. Natalie Jones finishes seventh in the final.

Matthew Whorwood finishes seventh in the final of the men's 100m freestyle S6 with a time of 1:11.21.

BRONZE MEDAL - Harriet Lee wins bronze in the 100m breaststroke SB9 final with a time of 1:19.53. Team-mate Louise Watkin had earlier missed out on a place in the final.

Great Britain lose 45-19 to Hong Kong in the men's team open category quarter-finals. They subsequently lost 45-15 to Russia and 45-12 to Hungary to finish eighth in the fifth-eighth classification.