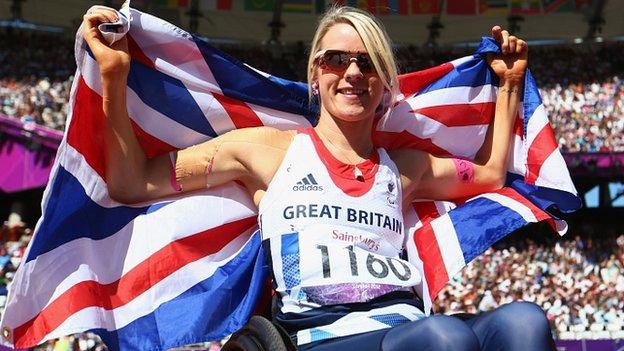 Pearson finished 242 points clear of Ireland's Catherine O'Neill, with distances converted on the basis of the athletes' disability category.

Born in Bristol, and now from Hay-on-Wye in Powys, Pearson became the first woman to represent Great Britain at wheelchair rugby at the last Games. After opting to concentrate on athletics in 2009, Pearson initially trained as a track athlete.

Despite fifth-place finishes in the 100m and 800m at the 2011 World Championships, she became frustrated with her lack of progress and focused on the throwing events instead.

Her willingness to change disciplines looked shrewd when she threw 6.66m at the CP Sport Grand Prix in Essex in May, an effort that was only kept out of the record books by a lack of ratification.

After finishing fifth in the club throw on Saturday behind O'Neill, Pearson left the Irishwoman and the rest of the discus competition far behind with her very first throw.

It is the first Paralympic gold of a sporting career that began as a keen able-bodied horse rider and continued in disability sport after a car crash in 2003, in which her boyfriend died and Pearson broke her back.

On the track, Richard Whitehead and Mickey Bushell failed in their attempts to complete sprint doubles.

Bushell, the winner of the T53 100m title on Monday, ran a European record time of 26.32 seconds in the 200m, but was only good enough for fourth place.

Whitehead, the T42 200m champion, finished seventh in his 100m final, going two hundredths of a second slower than the personal best of 12.97 seconds he set in the heats.

The evening session inside the Olympic Stadium continued to disappoint for Britain, with Shelly Woods placing sixth and Jade Jones 10th in the T54 1500m final.

But South African Oscar Pistorius eased through to Saturday's T44 400m final, winning his heat in 48.31 seconds, his best time of the season.

He will be joined in the final by Alan Oliveira,the man who beat him to 200m gold, the Brazilian finishing second behind American Blake Leeper in the first heat.