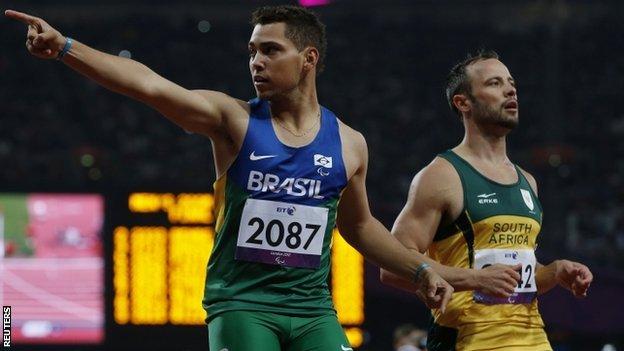 Oscar Pistorius says he wants tougher regulations on the length of running blades after suffering a shock loss in the final of the Paralympic T44 200m.

"You saw how far he came back. We aren't racing a fair race. I gave it my best. The IPC have their regulations

The South African was beaten by Alan Oliveira but claimed the Brazilian's prosthetic legs are too long.

"We are not running in a fair race here," Pistorius told Channel 4.

"I don't know how you can come back, watching the replay, from eight metres behind on the 100 to win. It's absolutely ridiculous."

Pistorius was overhauled in the final 20 metres as the 20-year-old Oliveira won in 21.45 seconds.

• His parents, Henke and Sheila, were advised that having the amputation done before he had learnt to walk would be less traumatic

• His parents wrote their son a letter, to read in later life explaining their decision, which read "a loser isn't the person that gets involved and comes last, but the one who doesn't get involved"

• By the age of two, Pistorius had his first pair of prosthetic legs and within days he had mastered them

• He played waterpolo and rugby in secondary school. He also played cricket, tennis, took part in triathlons and Olympic club wrestling and was an enthusiastic boxer

"Not taking away from Alan's performance, but these guys are a lot taller and you can't compete," added Pistorius, who was second in 21.52.

"I gave it my best. The guys are just running ridiculous times and they're able to do so."

Oliveira said the comments of his "idol" were hard to take.

"The length of my blades is all right," said the South American. "I went through all the procedures with the referees. I believe Pistorius also knows that.

"He is not a bad loser, he is a great athlete. I am just sad he said my blades were too big.

"For me, he is a really great idol and to hear that from a great idol is difficult."

Pistorus wants the International Paralympic Committee (IPC) to address the issue of blade length, claiming Oliveira's knee heights are "four inches higher than they should be".

"The IPC don't want to listen. We've tried to address the issue in the weeks up to this and it's just been falling on deaf ears."

The IPC said all blades adhered to strict regulations.

"There is a rule in place regarding the length of the blades, which is determined by a formula based on the height and dynamics of the athlete," a spokesman said.

"All athletes were measured today prior to competition by a classifier and all were approved for competition."

Pistorius, who holds the world record for the 200m, claimed that, although it is standard procedure for prosthetic blades to be measured before competition, "the guys rarely do the measuring in the call room".

Asked if he had changed the length of his blades between the semi-final and the final, Oliveira said: "No. Since the first time I put them on, they've been following the IPC rules and I've been using them already for a whole month."

In 2008, Pistorius was banned from competing in able-bodied events by the International Association of Athletics Federations, which ruled that his prosthetic limbs gave him an unfair advantage.

The ban was overturned later that year and Pistorius competed at the 2012 London Olympics, when he failed to reach the final of the 400m.