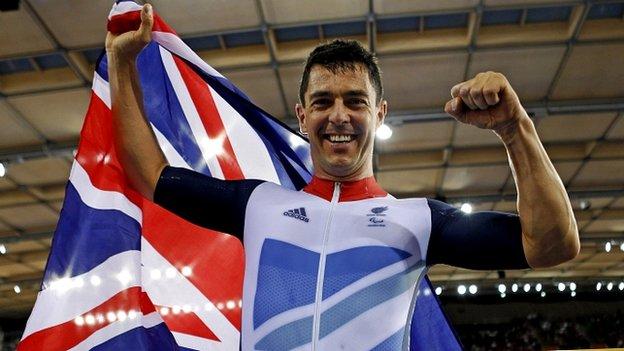 I'm happy with any medal, any colour in my first Games

"I think I went out a bit quickly," said McKeown. "I died a bit at the end, but I'm happy with the performance."

Darren Kenny took bronze behind McKeown, but had the consolation of setting a new world-record time of 3:35.257 in his third-place duel with Australia's David Nichols - more than two seconds slower than American Joseph Berenyi's gold medal-winning time.

While Kenny, who won gold over the distance in Beijing, was left wondering what might have been, there were no such frustrations for the imperious Colbourne.

The 42-year-old, who took up cycling after breaking his back in a paragliding accident in May 2009, was down by more than 1.1secs on gold-medal rival Li after the first kilometre of the 3km course.

But he always had the race under control, smoothly accelerating as Li faded and slipped back into his clutches.

Colbourne was racing the clock rather than the Chinese in the latter stages and, driven on by a raucous crowd, he duly pushed the world mark of 3:53.970 that he had set in qualifying even lower.

"I think at the moment I'm completely euphoric," he said. "We've been training for two years and preparing for this final push for the last four months. They told me to keep working hard and your dream will become a reality and I'm here today."

The gold is Great Britain's third of the Paralympics after fellow cyclist Sarah Storey and swimmer Jonathan Fox's victories.

Welshman Colbourne, who previously represented his country at volleyball, will turn his attention to Brands Hatch, where he competes in both the road race and the time trial.

He will be joined there by Butterworth, an Iraq veteran who lost his left arm in a rocket attack on Basra Air Base in August 2007.

He came to the track having just seen his own C5 time trial world record demolished by a devastating ride from Alfonso Cabello that put the 18-year-old Spaniard top of the standings.

Butterworth, 26, made a slow start in response, slipping more than 1.3secs down at halfway, but finished just 0.038secs off Cabello's effort after a storming second 500m.

"I'm happy with any medal, any colour in my first Games," said Butterworth.

"Obviously I came here trying to win gold. It hasn't happened exactly according to plan today. Kilo was my strong event, but I've been concentrating on the pursuit for the last six months. Hopefully tomorrow (in the men's individual pursuit) I can show my form."

Team-mate Cundy's attempt to overhaul the Spaniard ended before it had properly started as the officials, much to Cundy's disgust, denied him a restart after a starting-gate slip.

McGlynn and Scott had already won Great Britain's first medal on day two of the Paralympics in the morning session but, just as in the World Championships in Los Angeles earlier this year, they were beaten by the Australian pair.

The Britons set the fastest time as the penultimate pair in the blind and visually impaired tandem 1km time trial at the Velodrome.

But Felicity Johnson and Stephanie Morton overhauled them in the final run to grab the gold.

Glasgow's McGlynn, 39, won gold in Athens and Beijing with Ellen Hunter before teaming up new partner Scott, from Halesowen.

"It would have been nice to come away with the title and win another gold," said McGlynn.

"In training we were definitely on for that, but it didn't happen on the day. It's good to have a medal at least."