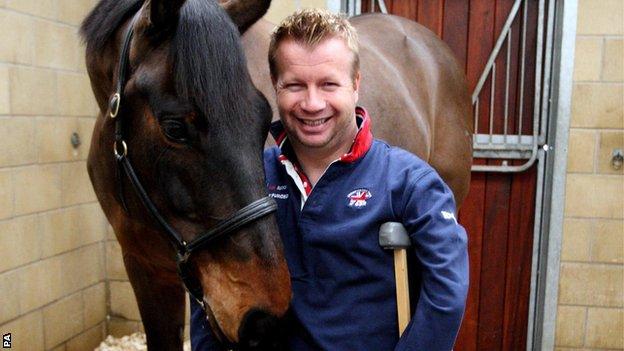 Lee Pearson could make history in London by overtaking Baroness Tanni Grey-Thompson as the most successful British Paralympian in the modern era.

"If you had to compare Lee Pearson to an Olympic athlete, I guess the nearest comparison you'd have would be somewhere between Sir Steve Redgrave and Sir Chris Hoy," says Grey-Thompson.

"But his personality blows everyone else out of the water. There is no one else I've ever met in my entire life that is quite like Lee Pearson."

Others describe Pearson as "larger than life", "a party animal", "flamboyantly gay" and "a man who doesn't suffer fools gladly".

He does not run or swim or ride a bike. He sits on a horse, making it move with grace and precision, a career for which he did not seem destined for at birth.

"My husband turned up and I said: 'Where's my baby?' He said: 'He's downstairs, his legs are a bit blue.' That turned out to be the understatement of 1974," she told BBC Radio 4's Profile programme.

Three days later, Lynda was told by one of the ward's sisters to get in a wheelchair if she wanted to see her son.

"I got in and she wheeled me down to this storeroom. He was actually in a storeroom," she remembered.

"They threw the covers back and his legs were bent as if someone was in a yoga position, one foot round one knee, the other foot bent behind - a double club foot. It was bent in and bent again.

"I was thinking: 'Pick him up and cuddle him as they will take him away and think you don't love him as he is so deformed.' I did. That was the start of a very loving relationship."

Pearson was born with a condition called arthrogryposis. His disabilities were so great that the surgeon felt obliged to reassure Mrs Pearson that, with proper care, he would eventually be able to walk, although he didn't think he would "become a great footballer".

Instead, Pearson's life took a different turn in a small paddock the family had bought next to their home in the village of Cheddleton, near Stoke-on-Trent.

"He didn't actually get onto his feet until he was six. Until then he got around the best way he could, on his back, wriggling," Mrs Pearson recalled.

"Someone gave my husband a donkey and Lee was really impressed and said: 'Put me on mum, put me on!'

"His whole face lit up as he could move far quicker than he could walk the previous six years. The donkey was Lee's legs. He could go wherever he wanted to."

In 1980, Pearson won a bravery award and was invited to meet the Prime Minister Margaret Thatcher at Downing Street. She insisted on carrying him upstairs herself.

As he grew, with help from Riding for the Disabled, Pearson's interest in horses flourished. So did his talent for putting himself forward.

In his mid-20s, Pearson sought out prominent rider and trainer Stephen Clarke on his stud farm in Cheshire.

"I was doing a training clinic for competition riders and he was watching and then asked if he could bring his horse and have a lesson," said Clarke. "The next day, he turns up with his horse and I was absolutely amazed at the way he could ride considering his disabilities.

"I invited him over to ride one of my horses - a fully trained horse - to give him a feeling of the grand prix exercises, which are extremely difficult, and the first time he rode the horse he could do everything."

In 1996, on sick leave from his office job, Pearson watched TV coverage of the Paralympic Games in Atlanta. He decided then that, by the next Games, he would be not only a competitor but a champion.

Four years later in Sydney, he won gold in dressage, dressage freestyle and team dressage. He did the same in Athens in 2004 and again in Beijing in 2008. Nine attempts, nine golds.

Pearson has also competed successfully against a field of non-disabled riders. In 2003, he became the first disabled person to win a title at the British Dressage National Championships.

Brash and loud, Pearson has complained publicly about not being given a knighthood. He is also known for choosing gay anthems to accompany his dressage routines.

This is, to put it mildly, not what the genteel world of dressage is used to.

After taking gold in 2008 - the equestrian events were held in Hong Kong - he went off to celebrate with team-mates, including silver-medallist Ricky Balshaw.

But they got lost, ended up on a dual carriageway and were pulled over by police.

"We were going to this party and three of us were on this one electric scooter," recalled Balshaw. "We thought we were going to get arrested but he just got his gold medal out. The police went from the strictest, most hardcore of police, to giggling screaming girls.

"We ended up getting a police escort to the party and had a great night."

After the 2008 Games, Pearson enjoyed further success before suffering an injury which could have ended his career.

"A horse fell on top of him and broke his back in four places," said Sarah Jenkins of Horse magazine.

"He was out of action for 12 weeks and back riding as soon as he could. He is not at all put off by those sort of injuries as a lot of riders would be. He is very strong-willed."

As he takes to the saddle in London looking for the three golds that would take him past Grey-Thompson's record, Paralympic team coach Michel Assouline expects it to be Pearson's toughest battle yet.

"The international scene has dramatically improved in the last three to five years," said Assouline. "The gap is narrowing and now we see a lot of riders having similar scores, or higher than him."

Balshaw added: "The pressure on him this year is huge. He still has that 100% win rate but he feels pressure each time to come up with that gold medal."

Grey-Thompson hopes Pearson can write his name in the history books.

"To be the most successful Paralympian would be something that he richly deserves," she said. "I can't imagine anyone I'd rather hand that title on to because he's an amazing athlete.

"Lee just doesn't take any prisoners. He doesn't let people patronise him, he doesn't let them talk down to him, he fronts people up and I think that's fantastic for him but also for the sport."

Radio 4's Profile of Lee Pearson was first broadcast on Saturday, 26 August 2012. You can listen again via the Radio 4 website or Profile download.