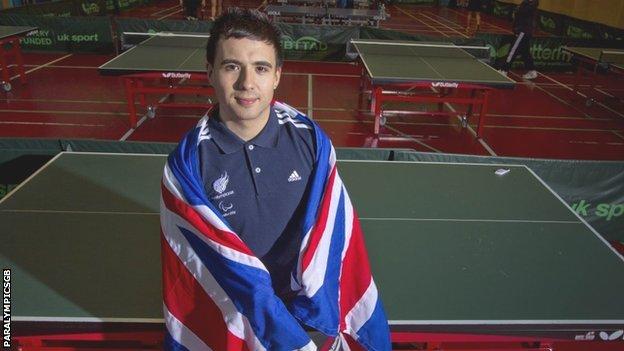 Will Bayley says he is "hungry" to re-establish himself as a table tennis world number one at the Paralympics.

The 24-year-old from Kent is currently number two in the standing-class seven rankings and is strongly fancied to pick up a medal for Great Britain.

"I was number one for six months and it's not nice when you lose that position. It makes you hungry to get it back."

Born with a condition called arthrogryposis, which affects all four of his limbs, Bayley had his first taste of Paralympic competition in Beijing, where he lost to top seed and eventual gold medallist Jochen Wollmert.

Great Britain failed to win a table tennis medal at those Games, but Bayley is adamant history will not repeat itself in London. GB will field a team of 13 athletes in the events at ExCeL, which begin on 30 August.

"This British team is very strong," said Bayley, who went to the famous acting and singing talent academy Brit School in Croydon. "We've got an unbelievable set of players and I've been training hard for six years for this.

"The Chinese are very strong but we can beat them on our day. We're training just as much as them and I believe we're on a level playing field."

Bayley has been living with his team-mates and performance manager Gorazd Vecko in Sheffield, near their training base at the English Institute of Sport.

He says that the arrangement has been beneficial - despite occasional quarrels with Vecko.

"We have have ups and downs," continued the 2011 European Players' Player of the Year, who is also set to play in the team competition with Paul Karabardak.

"We're like family, and he's like a dad. We have arguments but we are stronger for it. He is strict when he needs to be but he can also have a laugh and be chilled out."

Bayley gave up a sports science degree after one year to train full time in Sheffield. He also had to sacrifice aspects of his social life in order to try to fulfil his Paralympic ambitions.

"I haven't gone out in the last few years to be honest," he said.

"My friends are always going out but I usually have training. Whether I get a medal or not, it'll be worth it."