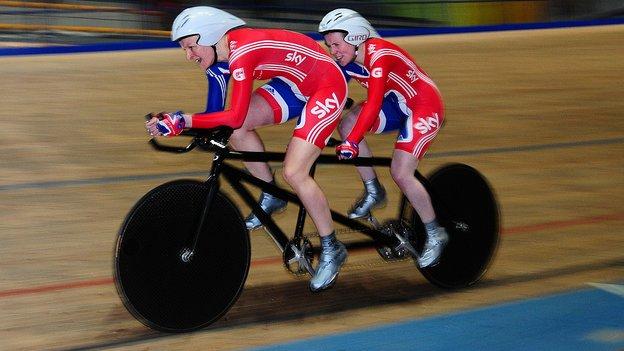 Lora Turnham might brush shoulders on a daily basis with the superstars of British cycling, but she has to keep her distance from Sir Chris Hoy.

Turnham lost her sight by the age of five as a result of a hereditary condition which also affects her mother and two brothers.

As a result, the 23-year-old's guide dog, Libby, is her constant companion as she prepares for the Paralympics at Manchester's velodrome alongside the Olympic squad.

"I know Vicky Pendleton, Jess Varnish," Turnham said. "I started on the academy so we stayed in the same flats as all the Olympic academy squad. Everyone is together as one team."

And Hoy? "Chris Hoy's actually allergic to Libby," she explained. "We chat but I try and keep her away from him!"

Liverpool-born Turnham turned to cycling in 2009 after starting out in athletics, and that same year managed two fourth-place finishes in the tandem events at the World Track Championships in Manchester.

"I was running as a teenager but I stopped getting any enjoyment out of what I was doing, so I took some time away from it but I started to really miss the competitiveness of sport," she said.

"I thrive off it and I need that kind of motivation.

"I always kept myself fit and I was talking to a friend during the early summer of 2009 and she was telling me about a friend who had moved over from athletics to cycling.

"I'd seen the cycling at Beijing in 2008 and how successful it was. I thought it looked really fun and someone talking about it made me think I really did want to give it a go. She put me in touch with her friend, who mentioned me to one of the coaches, and it just went from there.

"I never found it very hard, I just kind of clicked with it. It became something I enjoyed straight away and I still do."

The progression continued in 2011 when, with Fiona Duncan as her tandem pilot, the pair won silver in the 3km pursuit at the Worlds in Italy after just six weeks together, and then gold on the road in the time trial at the World Cup in Spain in June of this year.

Glaswegian Duncan is taking a career break from Grampian Police as the pair concentrate on London.

"Me and Fiona are friends off the bike as well as on the bike, so we work really well together," said Turnham, whose brother Roy will be part of the GB five-a-side football squad in London.

"There's really good communication between us, we know what each other needs as motivation and encouragement and we do our best to help each other.

"We both realise we both need to be in shape in order to make the tandem go fast. We're able to have a laugh too, so it's not serious all the time.

"It's important to improve as individual athletes as well as together, so we'll do certain sessions separately and then come together on the tandem on the track. It's finding that balance between being individuals and being a pair."

Turnham and Duncan are in the right place as they strive to get the balance right, with Britain's Para-cycling team as strong as the celebrated Olympic squad.

"It's nice to have people to use for experience," Turnham said. "Some of our team are really, really good at giving the more developing athletes support.

"We train at the velodrome in Manchester alongside the Olympic squad and everyone is trying to achieve the same goal. It's a really good atmosphere to be in because everyone is constantly striving to be better.

"Everyone is really supportive and give you everything you need to give you a good chance of winning that gold medal. It's not just us who want to win gold, it's the staff as well, so everyone is focused on the same thing."

Turnham has a busy schedule, with two events on the track and two on the road, but expects the experience of performing in front of a packed home crowd will take some getting used to.

"The kilo is the first event so we're just using it to experience the crowd, because I've never raced in front of anything quite like it," she said.

"We'll use that to get rid of any nerves, so when we get to the pursuit day we've done it before. The time trial is just an added bonus."