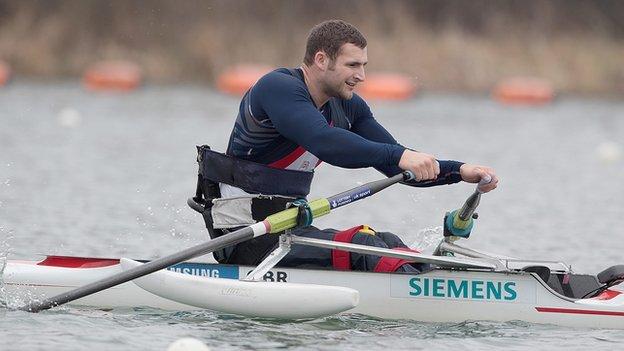 Rower Tom Aggar will have the chance to defend his Paralympic single sculls title after being named in the British team for the London Games.

Aggar, who in five years of racing has never been beaten, won gold when rowing made its Paralympic debut in 2008.

Rowing at the Paralympics

Sam Scowen and Nick Beighton have been named to compete in the double sculls.

Riches won bronze in the fours in Beijing four years ago.

"I'm so proud to have been selected into such a strong GB team. It's been a long four years since Beijing," Aggar, 28, told BBC Sport.

"I'm under no illusions that it will be tougher competition than Beijing but competing in a home Games is a great opportunity."

The mixed double sculls crew of Scowen and Beighton have improved rapidly since coming together early last year and finished sixth at the World Championships in Bled in September.

Scowen first learned to row on the Paralympic course at Eton Dorney as a member of Dorney Boat Club and will be hoping to make home advantage count.

Beighton is a British Army captain who lost both of his legs after being injured in Afghanistan two-and-a-half years ago.

"I am proud to have served my country in the Armed Forces and now this is a great honour to represent my country again in a completely different way," he said.