Around 4,000 athletes from more than 150 countries will be taking part in the London 2012 Paralympics, which run from 29 August to 9 September.

The Great Britain team for the Games has been finalised with some experienced competitors among the 289 athletes, as well as some newcomers.

A strong overseas contingent will also be travelling to London for what the organisers promise will be the best Paralympics yet, following on from the huge success of the London Olympics.

BBC Sport takes a closer look at some of those who will be chasing gold later this month.

Britain's top wheelchair racer and track athlete will be aiming to build on his efforts in Beijing, where he won golds in the 800m and 1500m in his category. 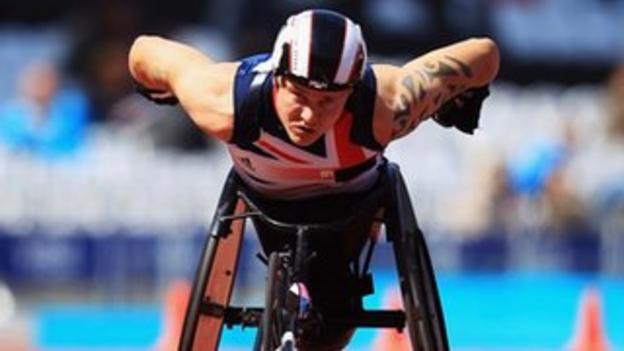 London will be Weir's fourth Games after he made his debut as a teenager at Atlanta 1996. He left the sport ahead of the Sydney Games four years later but returned in time for Athens and Beijing. He recently starred in the test event at the Olympic Stadium and, with his event opening the track competition there, will be hoping to give Team GB the greatest possible start.

2012 has already been a successful year for Weir, 32, with him claiming a sixth London Marathon victory last month, equalling the record of Baroness Tanni Grey-Thompson.

Born in St Petersburg in Russia, McFadden was diagnosed with spina bifida as a baby and was abandoned in an orphanage.

She spent the first six years of her life using her arms as legs and walking on her hands as if they were feet before being adopted by an American woman in 1994 and brought to live in Illinois.

Sport was used as part of her rehabilitation and McFadden fell in love with wheelchair racing, making her Paralympic debut as a 15-year-old in Athens, winning a silver and a bronze medal.

Now as an eight-time world champion, McFadden will be hoping to win her first Paralympic title when she lines up in the 100m, 200m, 1500m and marathon in London. 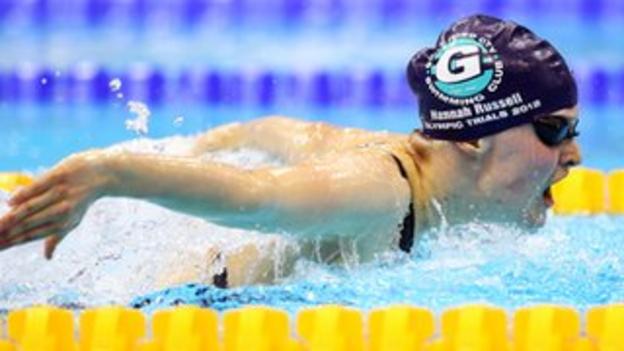 Four years ago in Beijing, British swimming star Ellie Simmonds came to the Games as an unheralded teenager and came away with two gold medals and Russell will be hoping that she can enjoy the same sort of success in London on her Paralympic debut.

Surrey-based Russell, who turned 16 earlier this month, came away from last year's European Championships in Berlin with silver in the 100m backstroke and bronze in the 100m butterfly.

She was impressive at the British Paralympic trials earlier this year, setting a European record in the 100m backstroke at the Olympic Aquatics Centre and coming away with five qualifying times. She has been rewarded for her efforts in combining swimming and studying at Gordon's School in Woking with a place in the London team.

The former RAF weapons technician lost his left arm in a rocket attack in Basra, Iraq in August 2007 and joined the British Cycling development programme via the Battle Back programme two years later.

The 26-year-old, who hails from Sutton Coldfield but is now based in Manchester, made a big impact on his international debut at the 2011 World Championships in Italy, winning gold in a world record time in the kilo event in his C5 category.

He retained his title in the face of stiff competition at this year's World Championship in Los Angeles, again setting a world record, despite suffering the effects of jetlag.

However his kilo event in London will be factored, which means that he and fellow GB team-mate Jody Cundy (who competes in the C4 category) could be going head-to-head for a gold medal which only one can win, with the winner the rider who goes closest to the world record for their class. 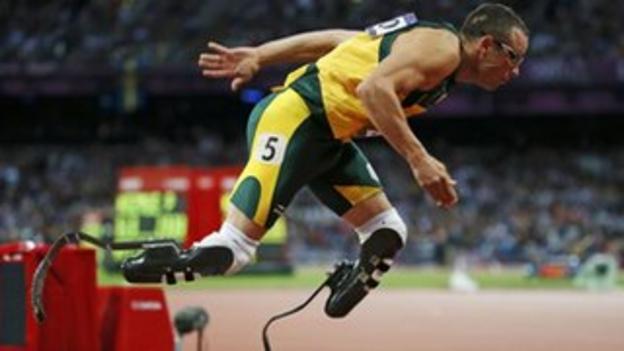 Ever since the South African known as Blade Runner arrived on the scene in his Paralympic debut in Athens as a bushy-haired teenager with braces, he has created a stir in the world of sport.

Pistorius, who had both legs amputated below the knee when he was just 11 months old, is almost an accidental athlete, having only turned to the track after getting injured playing rugby in 2003.

His 200m gold and 100m bronze in Athens, and his battle with athletics's governing body the IAAF over his prosthetic limbs, started to get him known and when he was cleared to run against able-bodied competitors in 2008 it opened up a whole new world for him.

The Beijing Paralympics saw him win three golds and having reached the 400m semi-finals at last year's World Championships in Daegu, he also reached the semi-finals of the event at the London Olympics and ran in the 4x400m as well as carrying the South African flag at the Olympic closing ceremony.

His 100m clash with American Jerome Singleton, Britain's Jonnie Peacock and compatriot Arnu Fourie is set to be one of the highlights of the Games.

Former wheelchair racer Phipps started playing wheelchair rugby in 2009 and has rapidly become one of the key figures on the Great Britain team where six players, including him, will be making their Paralympic debuts in London.

Unlike many of his team-mates who came to the sport after being left paralysed, Phipps lost both his lower legs and his finger tips after contracting meningitis as a teenager.

His speed and power around the court makes him a real asset and he is the GB team's key offensive threat as they hope to end the heartbreak of finishing fourth at the last two Paralympics, and come away with a medal. 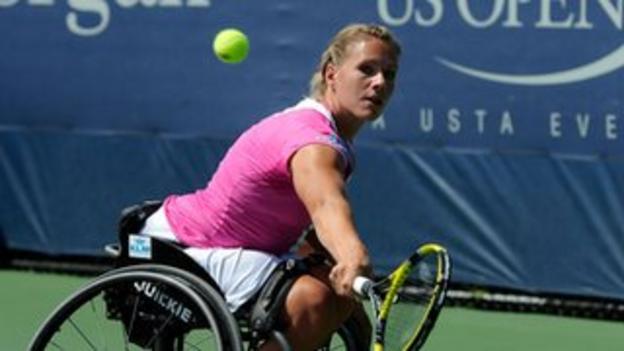 Dutch ace Vergeer's amazing record of 465 singles matches unbeaten is one that is unmatched in almost any sport.

The world number one comes to the Eton Manor courts at the Olympic Park as defending Paralympic singles champion and hoping to win her fourth gold in London.

In May, she warmed up for the event with victory in the Eton Manor Invitational at the same venue where she overcame the cold to beat Britain's Jordanne Whiley in the final.

Vergeer's movement around the court is poetry in motion and she will be hoping her superb tennis skill and will to win can help her add to her Paralympic tally in London.

Brighton-born but Dartford-based Quilter comes to London as world and European champion in his -60kg category and world number one.

Quilter, who started to lose his sight from the age of 10 because of the degenerative condition Stargardt's Disease, missed out on selection for Athens and admitted that he almost left the sport he started as a seven-year-old.

But he returned and was selected for the 2008 Games, where he finished fifth. Since then he has won the world title in 2010 before adding the European title in front of his home crowd in Crawley last November.

Whatever the result when Quilter takes to the mat on 30 August, he is in for a busy year as he is due to get married in October. 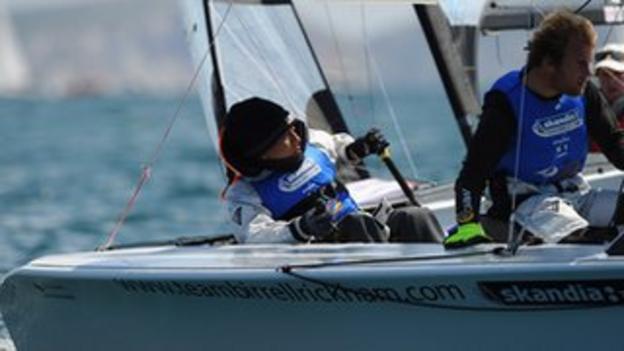 Rickham and Birrell came together as a pairing in the two-handed Skud category in 2007 and competed at the Beijing Paralympics, finishing fifth.

Birrell comes from a family of keen sailors while Rickham came to the sport after being left paralysed following a diving accident in her native Jamaica.

Since Beijing, the pair have gone from strength to strength in the class and come to London as favourites for gold having won four world titles in a row.

As well as another world title, 2012 has also seen silver medals at events in Hyeres and Miami and they will be hoping to make home advantage count in Weymouth where they triumphed in the Sail for Gold regatta in June, and win Britain's first medal in the sport.

Made his debut as a 20-year-old in Beijing, missing out on a medal, but has used that experience to help him to develop as an athlete.

Bayley, who was born in Poole, but is now based in Tunbridge Wells, was born with a condition called arthrogryposis which affected all four of his limbs. Then, aged seven, he was diagnosed with cancer and had to undergo chemotherapy at London's Great Ormond Street Hospital.

He moved up to third in the world in 2009, won singles gold last year at the European Championships in Croatia, and is top of his class seven rankings.

Outside table tennis, Bayley is a keen actor and used to attend the Brit School for Performing Arts in Croydon.