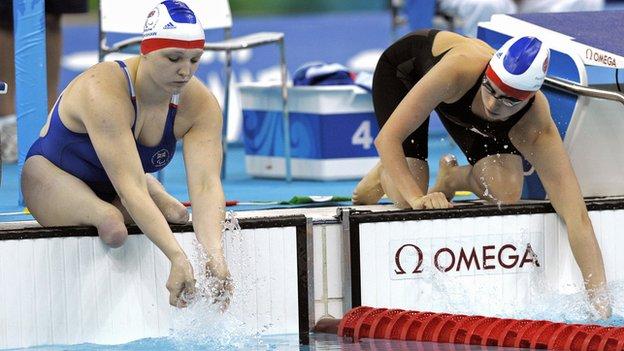 Britain's Paralympic swimming hopefuls have their last opportunity to book their London 2012 places at this weekend's trials in Sheffield.

The British International Championships are the second chance for swimmers to secure qualifying times following last month's trials in London.

Those still to secure their places include defending Paralympic champions Dave Roberts and Liz Johnson.

Roberts, who is currently equal with Baroness Tanni Grey-Thompson on 11 Paralympic gold medals, missed the London trials through illness.

The Welshman was also forced to miss last year's European Championships in Berlin with an arm injury.

And he needs a big performance in the 50m and 100m freestyle events in Sheffield as he bids to compete in his fourth Games and have a chance of becoming Britain's most successful Paralympian of modern times.

Both Johnson and her 100m breaststroke rival Charlotte Henshaw, who were first and second in their SB6 category in Berlin, missed the qualifying standard in London by a couple of seconds and will need to improve on that when the action begins in Sheffield on Friday.

"We set the nominations standards for the time of the third fastest in the world plus 2% so we know when our athletes make those times they have a good opportunity to improve and get close to medals come London," national performance director John Atkinson told BBC Sport.

"Between those who have already reached the standard and with another 10 or so swimmers a second or so off the standards we think we are well positioned to have a team of over 40 athletes, which was what we were expecting.

"When an athlete has been to a Games there is expectation on them and different pressure than on new athletes.

"Dave has had a tremendous Paralympic record but he has had a really hard two years and the last time he raced internationally was at the 2010 World Championships in Eindhoven.

"It is a big task but we know he is a great racer and I wouldn't discount him achieving anything.

"Charlotte and Liz have been working hard over the last six months and I think they were both just under 2% outside the standards they needed.

"But I know they have reviewed their performances in London with their coaches and refocused their sights on Sheffield and both have swum times previously."

If swimmers do not make the qualifying times, Atkinson and his fellow selectors will look at their performances at the trials and see where they fit within the published selection criteria and their medal-winning potential in London before the first phase of selections is announced early next week.

Swimmers who have already achieved the qualifying standards