Two months short of her 19th birthday, she walked into a clinic in her native Minnesota for the third of three epidurals to help ease the back pain she had been suffering. But something went wrong with the procedure and she lost the use of her legs.

Four years on and out of the depths of despair, Weggemann has become a record-breaking swimmer and will aim to mark her Paralympic debut in London with nine gold medals.

Weggemann had been a keen swimmer from the age of seven and in April 2008 was taken along, somewhat reluctantly, to the US Paralympic trials by her elder sister, who had seen an advertisement for the meet in Minnesota.

I've done more in the last four years than I think I ever would have done walking. It is still kind of surreal to me that this is my life and this is the path it is going on

Seeing the competitors in action made her realise that swimming was still an option and two days later she was back in the pool.

"I always say swimming has saved me and has helped me move forward in life," Weggemann told BBC Sport. "It gave me strength and the realisation that being paralysed doesn't have to stop me having goals and ambitions.

"Swimming while paralysed is totally different to swimming able-bodied. Your body positioning in the water is different when you have dead weight on your lower half and I've had to work hard on my technique, which is difficult but fun.

"I feel free when I'm in the water and being able to still do something I have loved for such a long time is special."

Weggemann woke up in the early hours of the morning during the Beijing Games to watch the swimming sessions online, and was inspired by what she saw. Fuelled by determination and hard work, her dream of being able to achieve a Paralympic place has moved swiftly to reality.

She explained: "When I watched the Beijing Games, I had only been training for a few months and, although I had seen improvements in my training, I didn't know how realistic a target appearing at a Paralympics actually was. 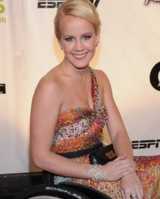 "It didn't really hit me that it was a realistic goal until spring 2009 when I first made the US team. Then, in August that year - when I broke my first world record - I realised I could be a contender not only to make the Games but to medal."

After a stunning international debut at the IPC World Short Course Championships in Brazil in November 2009, where she broke six world records and won five gold medals, Weggemann came to prominence at the 2010 World Championships in Eindhoven.

She was the most successful athlete at the event, winning eight golds and a silver, setting nine world records in her category and marking her out as a likely 2012 star.

Despite a bout of illness which kept her out of the pool from late 2010 until spring 2011, she recovered in impressive style at the Pan Pacific Championships in August with nine golds and another world record in the 100m backstroke, before ending the year with another world record - her 17th - in the 800m freestyle, which is a non-Paralympic event.

And, unsurprisingly, Weggemann admits her targets for next year are bold. "I have high goals for London - I can compete in seven individual races and, if I am selected, two relays," she said. "My aim is to win gold in each event and improve on my world records in each event, which would mean nine gold medals."

That would see her approach the feat of fellow US swimmer, Trischa Zorn, who won 12 golds - 10 individual and two relay titles in both Seoul in 1988 and Barcelona 1992.

"I'm excited to see how all my hard work pays off in London and to be part of Team USA at the Games. I think the atmosphere will be different and something I've never experienced before. I know it will be one of the most memorable events in my life.

"I was asked on American television in August 2009, 'If you could change the events of January 2008, would you?' and I found myself saying, 'No'. Although I would do everything possible to walk again some day if the technological advances were there, I would never go back and change that day.

"The journey that life has taken me on since then and the things I have learned about myself and the opportunities I have been given have changed me as a person in so many ways that I wouldn't be me if that day never happened.

"I've done more in the last four years than I think I ever would have done walking. It is still kind of surreal to me that this is my life and this is the path it is going on."