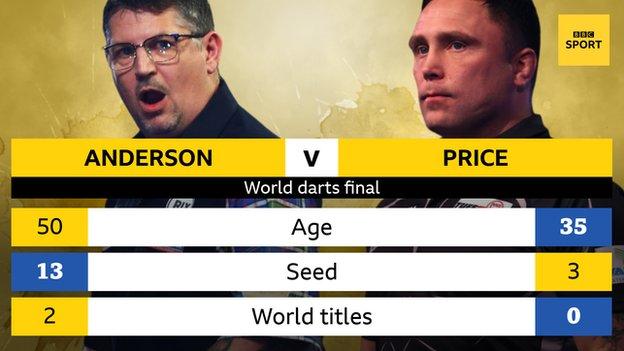 Two-time winner Gary Anderson will face third seed Gerwyn Price in what could be a feisty PDC World Championship final on Sunday.

It is the Flying Scotsman against the Welsh 'Iceman' and the pair have history, including a stormy clash when Price won the 2018 Grand Slam of Darts.

"I will be quiet and he will be loud," Anderson said after beating Dave Chisnall 6-3 in Saturday's semi-finals.

"I'm here to win this tournament and I've got every chance," said former rugby union player Price, who will become world number one for the first time if he lifts the Sid Waddell Trophy.

Anderson is 8-7 up in previous matches against Price. He is in his fifth final at Alexandra Palace and has gone on to lift the trophy twice - in 2015 and 2016.

Despite the lack of spectators because of the coronavirus pandemic, there will be plenty of tension on the oche as the pair slug it out over the best of 13 sets for a first prize of £500,000.

What happened in Wolverhampton?

Sunday's Ally Pally showdown will be first time the duo have have met in a major final since their Grand Slam of Darts dust-up in November 2018.

Price triumphed but an independent panel later found he resorted to gamesmanship in an ill-tempered final where the duo twice squared up to each other.

He was eventually fined £10,000 for his behaviour in the tournament.

Price clashed with Anderson over what the Scot viewed as slow play and over-exuberant celebrations by his opponent. The Welshman was also fined over his antics when beating Australian Simon 'The Wizard' Whitlock in the quarter-finals.

The Iceman has been a slightly cooler figure since, albeit his performances remain punctuated with shouts and fist pumps to greet maximums or big finishes.

Having been booed in the past by some spectators, competition behind closed doors may have been an unexpected benefit for him.

Anderson is a more phlegmatic character, although remains unafraid to give his opinion.

He said fans would have been better off watching Coronation Street than his 4-3 third-round win over Mensur Suljovic, where the Austrian's pace of play riled him.

"I've always played darts, but if that's darts, I'm offski," said the Scot, who later went on to call Wayne Mardle a 'numpty' when the pundit questioned his reaction.