PDC world champion Gary Anderson says his eyesight "is getting a bit dodgy" but would need to adapt his throwing action if he played wearing glasses.

The Scot, who miscounted three times during the final, told BBC Radio 5 live: "I need to get my eyes tested - I am seeing numbers that aren't there.

"But I would have to change something, to get used to playing in glasses."

Anderson, who was the only player to complete a nine-dart finish in the tournament, says he has experimented with wearing glasses during practice.

But while his eyesight improves, his throwing style is hampered.

"I have used reading glasses when I have had a throw, and I can see the board fine, but I find that I am knocking them halfway across my face," he added.

Anderson, who allowed Lewis to draw back to 2-2 after miscounting when well-placed for a break in the fourth set, insists his mistakes were due to a lack of mental focus rather than an eyesight issue.

"I was having a bad day and the brain wasn't ticking over quite right," he said.

"I have made few mistakes over the past couple of weeks, but I think it is just concentration. You are working everything out all the time." 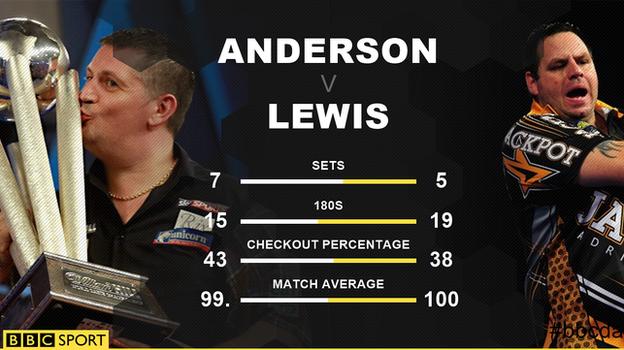